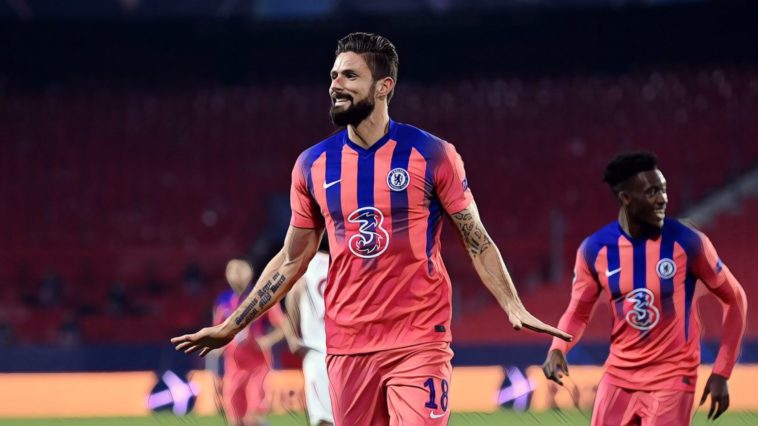 Frank Lampard has refused to give Olivier Giroud or ‘any player’ assurances over game time at Chelsea following the forward’s recent comments about his lack of minutes.

Giroud has endured a frustrating start to the season at Chelsea and has struggled to command regular first-team football, failing to start a single Premier League fixture and featuring for just 47 minutes across five substitute appearances.

The France international starred during a rare opportunity in midweek and became the oldest hat-trick scorer in the history of the Champions League, scoring all four goals as the west Londoners thrashed Sevilla 4-0 to secure qualification to the knockout stages as group winners.

Following the clash Giroud spoke of his desire to stay at Stamford Bridge and ‘win trophies’, though admits he will need assurances over his playing time as he bids to maintain his place in the France side ahead of next summer’s European Championships.

Lampard, however, says it is ‘difficult’ to give assurances to any player in his squad given the competition for places at Chelsea, though says Giroud will be handed more opportunities if he can produce similar displays to his sensational showing in Seville.

‘With Giroud, it’s not a case of giving any player assurances over game time because with a competitive squad like ours, that’s very difficult to do,” Lampard told the press ahead of tomorrow’s home clash with Leeds.

‘All you want is for players, when they’re out of the team, to train well, get themselves in the team and perform like Oli did the other day because then that gives me nice problems. I’m happy with him – his form is good and he’s training well.

‘In that forward area, I have competition for places. Tammy Abraham has been playing very well for us this season, scoring goals and making assists.

‘I never see anything negative from Oli and I have huge respect for him. If he plays like he did against Sevilla, clearly he will get more opportunities to play because that was just a top-class performance.’

Read – Smashed it! 10 players that shone during Champions League gameweek 5