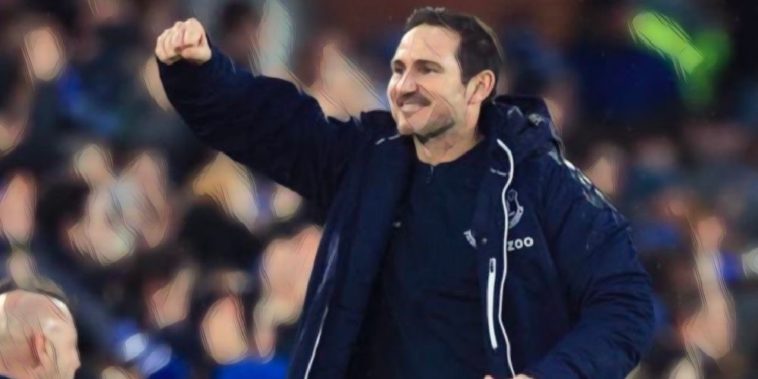 The Frank Lampard era at Goodison Park got underway with an impressive 4-1 win over Brentford to book their place in the FA Cup fifth round.

Much has been written about Everton this season, the Toffees having won just two of their last 15 outings in all competitions, a run of form that led to the sacking of Rafael Benitez, with Lampard being confirmed as the clubs latest manager on Monday.

Ben Godfrey was forced off in the opening 15 minutes, though it would be his replacement, Yerry Mina, who netted the first goal of the Lampard era, the Colombian’s towering header meeting Demarai Gray’s corner to give the Blues what was a deserving lead on the half-hour mark.

Q: Who scored the first goal of the Frank Lampard era?

Everton have looked devoid of ideas for large parts of this season, though looked revitalised under their new manager, and they doubled their lead three minutes into the second half. Richarlison peeled off Pontus Jansson to get onto the end of Allan’s ball over the top before the Brazilian confidently dinked the ball over the onrushing David Raya.

Brentford would be given a chance to pull one back with Jordan Pickford bringing down Ivan Toney, the 25-year-old calmly slotting the resulting penalty into the bottom corner as he looks to atone for his misguided comments whilst on holiday.

The Merseyside outfit would however restore their two-goal advantage, and again it would come from a corner, Mason Holgate nodding home from close range after Yerry Mina had won the initial header.

The Toffees wrapped up the scoring to book their place in the fifth round of the FA Cup in stoppage time as three substitutes combined. Andre Gomes picked out Cenk Tosun in the channel who held the ball up well. The Turkish international – who has only featured once for the club all season – picked out the run of Alex Iwobi who touched it into the path of Andros Townsend who wrapped up the scoring with a tidy finish.

The perfect start for the new boss. Top performances all over the pitch and Goodison at its very best!

Speaking after the game, Frank Lampard was thankful to the fans for their support following his arrival and during the game

“I can only thank the fans for their support. They supported me at the start and at the end after the team’s performance. On a personal level, I have huge thanks to the fans, who have been so welcoming from my first day.

“Today was something very special and something I’ll never forget. We all hear about the Goodison effect and we wanted to bring that out today – the way the players played did that.”

While the former Derby and Chelsea boss said he was ‘excited’ by his side’s performance, he said that they must now ‘calm down’, warning that there is a ‘a lot of work to do – the Blues just four points above the Premier League’s relegation zone.

“It got me excited. Now we need to calm down and look ahead to some important league games. We have a lot of work to do, but I saw some really promising signs.

“We’re an Everton team, so we must be aggressive, sprint, tackle when the ball is there to be won. That was there today and it must continue.”

Dominic Calvert-Lewin missed the game through injury, though Lampard said that the striker could return for their trip to St James Park on Tuesday evening.

“I’m hopeful [he will be available for the Newcastle game],” he said. “He was training outside on his own yesterday but it’s another thing whether he is match ready in three days’ time. We will have to see where he’s at.”