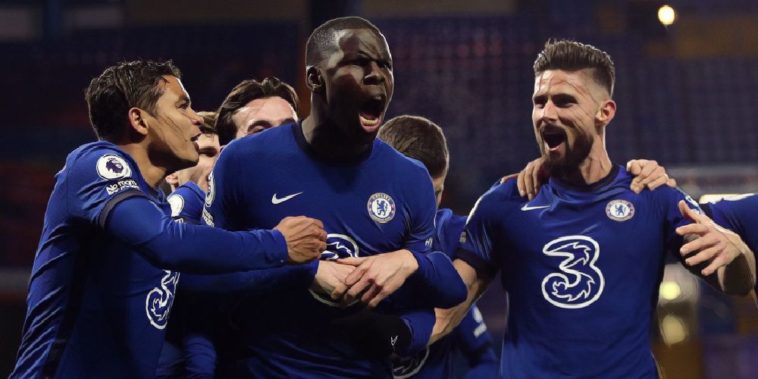 Chelsea gave their 2,000 returning fans the perfect welcome home present with a 3-1 win over Leeds to take them to the top of the Premier League.

It was a frantic start at Stamford Bridge, and it was Leeds who grabbed themselves an early lead as England international Kalvin Phillips played a perfectly weighted pass into the path of Patrick Bamford. The former Chelsea academy graduate nipped in behind Kurt Zouma, hitting the ball past Edouard Mendy and knocking it home into an empty net after three minutes.

Unsurprisingly, it was an entertaining and open game between two attack-minded sides, and Chelsea spurned a number of chances to pull themselves level. However, they eventually bagged themselves an equaliser in the 27th minute when Reece James delivered a low, first-time cross into the near post that was stabbed home by man of the moment, Olivier Giroud – the Frenchman having netted four in the midweek Champions League win over Sevilla.

Both sides continued to create opportunities throughout, and shortly after Leeds ‘keeper Meslier had made an impressive double save from Timo Werner, Frank Lampard’s side finally got themselves ahead as Kurt Zouma rose highest to power home a header from a Mason Mount corner.

Chelsea confirmed all three points in stoppage time as the rapid Werner got in behind the Leeds defence, and having been denied on a number of occasions himself throughout the game, the German unselfishly squared the ball across the box for Christian Pulisic to slide in and net the Blues third.

Speaking after the game Frank Lampard admitted it was a ‘nervy’ game right until the death but felt his side were deserved winners,

🤞Christian Pulisic becomes @ChelseaFC's 1⃣3⃣th different @premierleague goalscorer this season – 4 more than any other side in the division pic.twitter.com/GRlsjxuhjf

“We started brilliantly in the first few minutes but then they scored so that’s a test straight away,” he told Sky Sports. “We created so many opportunities, stayed positive and defended well.

“We had to accept they would probably create chances but I thought we dominated the game in terms of action in the two boxes. I thought we deserved the win though it was a bit nervy until the end.

“It’s our job to get the message across. Even our centre-backs, Thiago Silva, the moments he had to bring his quality through, he did that. There were lots of good individual performances.”

The former midfielder also revealed that he has been working to improve his side’s goal threat from set pieces: “Yeah. We have been working hard but it’s always the players. They have to go up with the intention to score. You look at Kurt [Zouma] now. We knew we needed to improve and the players are doing that. If you want to be successful in this league, you usually have to be good at set-pieces.”

The win moves Chelsea to the top of the table, although they can be overtaken by Liverpool and Spurs who both play on Sunday, but Lampard insisted that it’s too early to draw any conclusions about the campaign ahead.

“It’s early December and there’s a long way to go,” he said. “But we are a progression. When you bring in new players, have young players and you’re trying to integrate… Whether it’s this season we get to the heights we want, I don’t know. But we are moving in the right direction.

“I’m really pleased. It’s work on the training ground and staff behind the scenes. At our level, at Chelsea, people will always question us. Our job is to not get caught up in the chat. We have to keep our feet on the ground. There’s a long, long way to go. At the minute we’re in a patch.”

Next up for the Blues is a dead rubber Champions League tie against Krasnodar before travelling to Merseyside to take on Everton next weekend.

See Also: Rating the impact of the five most expensive summer transfer signings