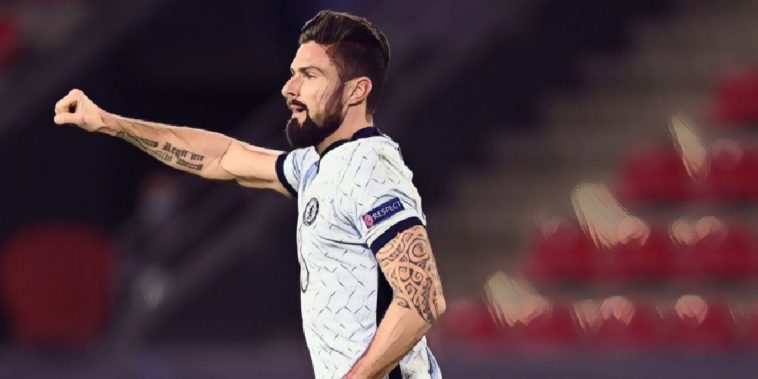 A stoppage-time winner from Olivier Giroud was enough to see Chelsea become the first team to book their place in the Champions League knockout stages.

Chelsea started brightly and took the lead after 22 minutes, England international Mason Mount winning the ball back deep in his own half before playing a sumptuous ball over the entire Rennes defence into the path of Callum Hudson-Odoi, who calmly slipped his effort underneath goalkeeper Alfred Gomis.

Following the opener, the home side began to get a foothold in the game, and in the second half, were denied an equaliser by former teammate Edouard Mendy in the Chelsea goal, the Senegal international being forced into a number of good saves to deny his old side.

With five minutes of normal time to play though, Mendy was eventually beaten as Serhou Guirassy rose unchallenged from a corner to power home a thumping header to level the tie.

However, the Blues secured their passage through to the knockout stages in the first minute of stoppage time, super-sub Olivier Giroud heading home after Gomis had saved Timo Werner’s initial effort.

“I’m very happy to qualify with two games to spare,” Lampard told BT Sport. “It was a really tough match, they’re a very good team. Their recent form doesn’t reflect how good they are, it was a tough hard-fought win.”

Much has been written about Olivier Giroud’s future in recent days, especially following comments from France boss Didier Deschamps that he could need to leave the Stamford Bridge club to retain his place in the international setup ahead of next summers European Championships. Speaking about the matchwinner, Lampard insisted the Frenchman will get minutes despite the competition for places in the Blues attack.

Olivier Giroud only had his eyes on the ball there, and powered his header home! 💪

Chelsea are into the Champions League knockouts! pic.twitter.com/v8ksViwe6m

“He does things like he does tonight, he’s great,” he said. “It wasn’t just his goal when he came on but his hold up play and physicality.

“I have a problem because Tammy [Abraham] is playing well and Olivier in the restart was incredible. I have two players fighting for the position, but it’s a good problem. He’ll get his minutes because of the amount of games, you saw the reaction to his goal, and that wasn’t just because it was a late winner, it shows what he does day-to-day and what he means to the team.”

Next up for Chelsea is a mouthwatering tie against early league leaders Tottenham in what promises to be an intriguing London derby.

“We have to prioritise the game in front of us but we’re aware of where we are in the league and that Sunday is a big game,” Lampard said of the clash. “It always will be because of the rivalry and they are a great team and now it’s just about preparing well. They’ll have a day off tomorrow and then come Thursday morning we’ll start thinking about Spurs properly.”