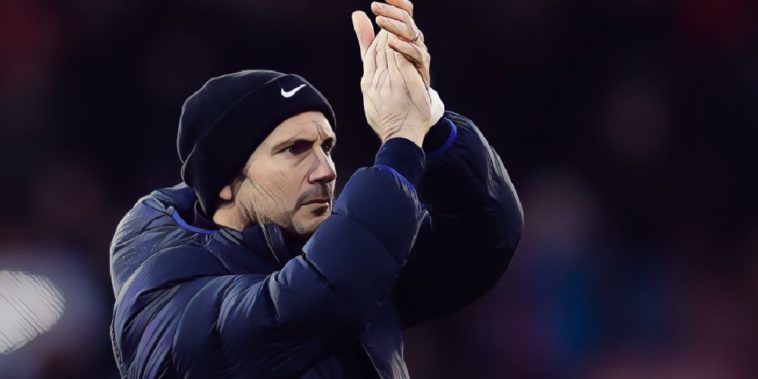 Chelsea’s hopes of securing a top-four finish were handed yet another blow after scrapping to a 2-2 draw with relegation-threatened Bournemouth.

After a promising start to the season, Frank Lampard’s side have since struggled for consistency of late, winning just two of their eight Premier League games since the turn of the year, with a whole host of sides having closed the gap behind them.

Having been comprehensively beaten 3-0 at home by Bundesliga leaders Bayern Munich earlier this week, the west London outfit made the relatively short trip to the south coast to face a similarly out-of-form Bournemouth, who came into the game three points above the drop zone.

Chelsea did manage to take the lead, Marcos Alonso smashing the ball home at the back post after Olivier Giroud’s header came back off the bar following a delicious Reece James cross.

Two goals in three second-half minutes turned the fixture on its head though, Jefferson Lerma powering home a header from a corner before Joshua King poked home Jack Stacey’s cross to put Eddie Howe’s side in front with 33 minutes still to play.

However, having found the net against Spurs last week, Alonso would prove to be the Blues’ goalscoring hero once more, the Spaniard getting the better of his man to head home with five minutes to play and rescue a point.

Speaking after the game, Frank Lampard was disappointed with the result, but pleased with the ‘character’ his side showed to earn a point, though suggested his side suffered a loss of concentration to once again after conceding twice in quick succession.

“We should win, we had many chances,” Lampard told Premier League Productions. “We had a bad 10-minute spell where they scored and that I don’t like. I’m pleased with the character to get a draw but we should win the game.

“Against Bayern, we conceded twice in a short space of time, it’s not the first time. Could it be a lack of concentration? Possibly from the players.

“People talk about the defence but if you are 1-0 up and leave teams in the game than one set piece can change the game. We should score more goals and then we don’t have that problem.”

The result ensures that Chelsea will remain within the top four for this weekend at least, moving four points ahead of Manchester United ahead of their game against Everton on Sunday, and Lampard admitted that a top-four finish would be a ‘huge’ achievement.

“We expected a fight and they gave us a difficult game but we should win the game, we had a lot of possession and chances,” the former midfielder added.

“The character of the team was great, it wasn’t for the want of trying but we need more goals.

“Marcos Alonso has had a big week but I don’t want my left-back top of the scoring charts. I want our attackers scoring goals and they haven’t.

“We wanted to win, we should have won but it’s a difficult league. It’s that cut throat part of the season. If we keep having games like this and we are not clinical it’s tough.

“The way the season has panned out, we should be pleased that we are fourth but it means nothing at this stage. If we manage to get in the top four the achievement is huge but we are a long way from that yet.”

Tough nuts: Five of the hardest footballers to ever grace the British game