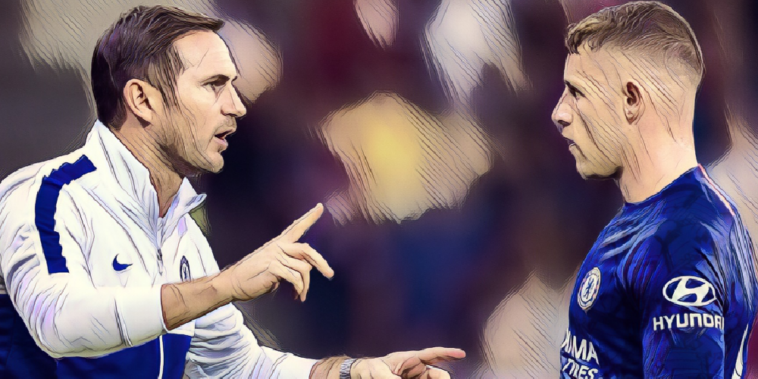 Frank Lampard has discussed Chelsea’s transfer activity this month and the future of Ross Barkley amid interest in the midfielder from West Ham.

Chelsea were predicted to be amongst the more active Premier League teams this month following the lifting of the club’s transfer ban, though so far, it has been a quiet window at Stamford Bridge.

The club are believed to be interested in adding another forward to their ranks with Lyon’s Moussa Dembele having been linked, whilst Lille midfielder Boubakary Soumare is said to be at the centre of a transfer battle between the Blues and top-four rivals Manchester United.

Despite the reports that a deal for the latter is edging closer, Lampard refused to comment on any ongoing speculation and says Chelsea are not close to finalising any potential deals at present.

Speaking at his pre-match press conference ahead of this weekend’s trip to Newcastle, the former midfielder said: “There is nothing imminent. There aren’t people waiting in the wings.”

Boubakary Soumare will move to the Premier League this month. He's tempted by #mufc, but he's slightly leaning towards Chelsea at the moment. He would cost £40m+ #mulive [sky]

When pressed on specific deals for Dembele and Soumare, Lampard was similarly evasive: “I won’t talk about individuals. There is nothing imminent.”

In terms of outgoings, Lampard revealed a move for Olivier Giroud could happen, the veteran striker keen to secure regular first-team football ahead of the summer’s European Championships and is subject of interest from Inter Milan.

England midfielder Ross Barkley has also been tentatively linked with joining former Everton boss David Moyes at West Ham, having endured a frustrating period of late and keen to secure his place in the England squad this summer.

Lampard insists the 26-year-old remains a part of his plans and will be going nowhere, the Chelsea manager’s stance similar on winger Willian despite the Brazilian having entered the final months of his contract.

“There is no talk here of Ross Barkley going anywhere,” Lampard declared. “He is our player. He has played the last couple of games and done very well.

“There have been certain circumstances why Ross hasn’t featured as much this year, but I have a lot of faith in him. That was news I heard like everyone else this week, and no feeling towards it.

“Olivier Giroud we know there may be something that could happen. The good thing about Oli is that he’s so experienced. I have a really good relationship with him, as do the club, so if all circumstances are right that may happen, but it’s not, so while it’s not he’s our player.

“Willian is not going anywhere. We know his contract is up at the end of the season, he’s in conversation with the club, which are still ongoing. There is no news on that but he’s certainly our player now.”