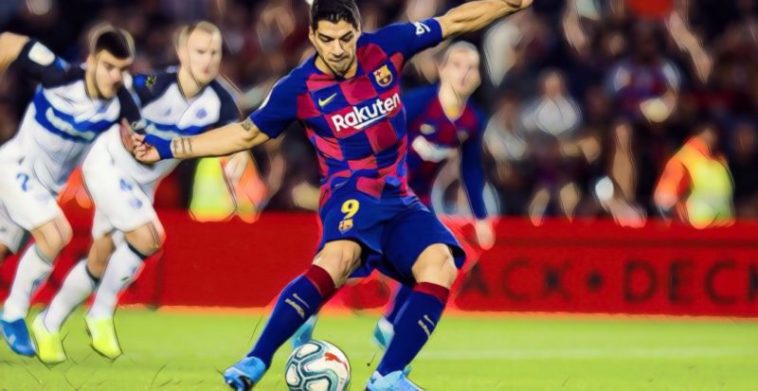 In the final round of games prior to the Winter Break, there were talking points aplenty after play finished up for 2019 in La Liga at the Santiago Bernabeau on Sunday night after Real Madrid’s scoreless home draw with Athletic Bilbao.

Let’s take a look at what materialised over the weekend in Jornada 18 in La Liga.

Suarez-inspired Barca back in the Goals

The scoreline possibly flattered Barcelona, particularly as the game was delicately poised at 2-1 on 69 minutes with Alaves in the ascendancy when a clash occurred in the midfield area.

The resultant throw-in was seized by Barcelona, Luis Suarez passed to Lionel Messi and the Argentine wizard, in keeping with his own elevated standards, curled in a standard 25 yarder. Game over.

The highlight of the Barcelona performance was the efficiency of Luis Suarez at number nine. Three assists and a goal was an impressive return from El Pistolero.

Suarez squared to Antoine Griezmann for the opener on 14 minutes, slipped in Arturo Vidal to increase the lead for the Catalans just before the break, set-up Messi to push the score out to 3-1 on 69 minutes, and finally despatched a penalty on 75 minutes which he had engineered himself.

Suarez has always had the appearance of a player who could do with shedding a pound or two. Now more so than ever.
He also retreats from offside positions at his leisure which seems to slow attacks for his team at times.

This could be viewed as laziness on his part or a wily attempt to line-up just on the shoulder of the last defender as the final pass is being played. The latter seems a more realistic conclusion considering his numbers so far this season.

Three assists and one goal yesterday, 10 goals and six assists up to this point in La Liga for Suarez. Barcelona’s go-to guy on Saturday.

Atleti grinding it out

Atletico Madrid recorded their first win on the road since the away win at Mallorca towards the end of September, in a hard-earned 1-2 win away to Real Betis.

Los Colchoneros have had a positive couple of weeks since the home defeat to Barcelona in Jornada 16, three consecutive victories, two in La Liga, ensure Atleti head into the Christmas break fourth in the table.

Second-half goals from Angel Correa and Alvaro Morata ensured Diego Simeone’s side returned to the capital with the three points despite having just 33% possession and Marc Bartra’s late consolation for the Seville-based side.

The form of Alvaro Morata has to be a big plus for Atletico heading into the New Year.

A goal, an effort ruled out for offside and a shot against the left-hand post in the first-half, all signs that Morata is starting to perform to a level he has shown in the past, which is a timely boost for his side.

Julien Lopetegui’s Sevilla side picked up three points away to Mallorca in Saturday’s early kickoff.

Sevilla without creating clear goalscoring opportunities or putting the side placed just above the relegation spots in 17th position under intense pressure, scored twice through Brazilian midfielder Diego Carlos in the first period and a second half penalty put away by Argentine playmaker Ever Banega.

Lopetegui’s side bounced back from last weekend’s disappointing home defeat to Villarreal and are well-placed in third position going into the Winter Break.

Los Blancos could not breakdown the Athletic Bilbao defence in Sunday’s final game of Jornada 18.

In a game which Real Madrid controlled throughout, the missing part was a goal to move the Madrid side level with Barcelona heading into the new calendar year.

Zinedine Zidane’s charges can feel they shaded proceedings with Barcelona in Wednesday’s Clasico but again, as in Sunday’s fixture they could not score which has been a problem for his side of late.

Karim Benzema is top scorer for Real Madrid in La Liga on 12 goals, the next highest scorer is Sergio Ramos on three goals.

Zidane has clearly settled things down at the Bernabeau and has had standout performers in Fede Valverde, Casemiro and Karim Benzema of late.

Serbia international Luka Jovic saw game time on Sunday evening and Zidane will hope others step up to assist Benzema in the scoring stakes to ensure the Chamartin-based side maintain their league challenge, which has been gathering pace of late.

Real Sociedad on the rise

La Real recorded an impressive away win at Osasuna on Sunday in a seven goal thriller at El Sadar.

First-half goals from Mikel Oyarzabal, Portu and in-form playmaker Martin Odegaard had the San Sebastian based side in a comfortable position at half time.

An expected a second half fightback from the battling home side materialised and a fourth goal from Swedish youngster Alexander Isak, after his equaliser against Barcelona last week, ensured Imanol Algucil’s side went home with all three points.

Real Sociedad head into the break in fifth position on 31 points, a point behind Atletico Madrid in the coveted Champions League spots.

Read – Best of the 2010’s: The top five football books of the decade