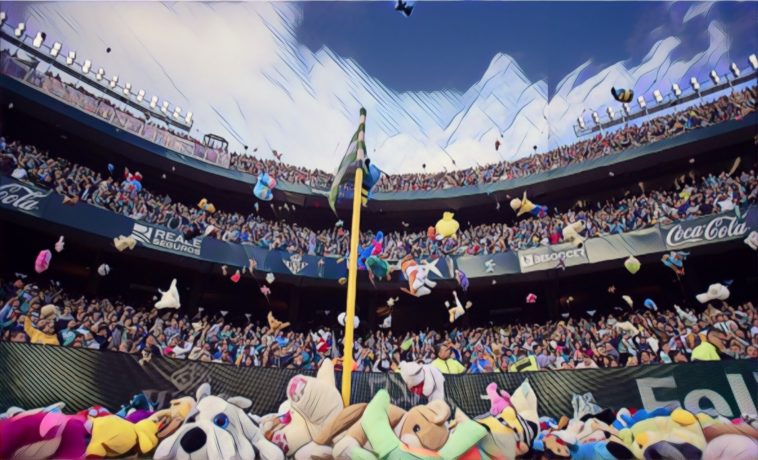 There were a number of impressive performances in the last round of fixtures prior to the Winter Break.

The next round of games will take place on the first weekend of January. 4-2-1-3 is the formation we have opted for after a weekend of exciting attacking play.

The 22-year-old Spanish netminder gave a mature performance belying his tender age in the Basque side’s scoreless draw away to Real Madrid.

That’s two clean sheets in a row for Simón in La Liga, this time around he was called on to make a number of interventions to keep Los Leones in the game. Athletic Club head in to the break in eighth position level on points with Valencia who occupy seventh place.

The Real Madrid right-back was a commanding presence in Sunday night’s game with Athletic Club in the Bernabeu. Carvajal foraged down the right-hand side and provided quality deliveries which went unconverted.

The home side drew a blank for the second game running and a last gasp equaliser last Sunday away to Valencia is proof of the issues Zidane’s side face in front of goal. They work hard to get into positions to deliver crosses and create opportunities, but have struggled to convert.

The 24-year-old Spanish centre-back was tasked with keeping tabs on Karim Benzema and was a solid presence at the heart of the Basque outfit’s defence throughout the scoreless draw at the Bernabeu.

Los Leones haven’t conceded in their last two league fixtures, the defensive partnership forged between Martínez and Yeray Alvarez going a long way to keeping the opposition at bay.

The 26-year-old Brazilian scored his second goal of the season for the Andalusian side, who cemented third place in the league standings after a comfortable away win at Real Mallorca.

Sevilla turned things around after a disappointing home defeat to Villarreal in the previous round of games and Carlos’s opener settled his side. Ever Banega secured the points with a second half penalty.

Julen Lopetegui’s team are in third place on 34 points, three points behind Real Madrid and five behind leaders Barcelona.

The Portuguese left-back put in an impressive shift in Leganes’ impressive home win against bottom side Espanyol. Leganes were full value for the three points; goals from Martin Braithwaite and a well taken Youssef En-Nesyri finish after neat interplay on the left between Braithwaite and Rodrigues were just rewards for the host’s endeavours.

Leganes are currently in 19th position but will be in a positive frame of mind going in to the break knowing they have picked up seven points out of a possible nine in their last three games. They trail Mallorca by just two points who currently occupy 17th place, just outside the relegation placings.

The Argentine midfielder was a commanding figure in the Basque outfit’s comfortable 3-0 home victory over Granada on Friday night. Escalante picked out Sergi Enrich in the 21st minute with a well placed right-wing cross to send Eibar on their way.

Eibar have had a solid week, drawing away to local rivals Athletic Club in Jornada 17 followed by an impressive home win on Friday night at Ipurua, which sees Jose Luis Mendilibar’s side head into the Christmas break in 16th position in La Liga.

The diminutive Argentine scored the Catalan side’s all important third goal against Deportivo Alaves on Saturday. Messi’s standards are so high that you could say his form had slightly dipped in the last week.

Subdued away to Real Sociedad last weekend, he also had a quiet performance in midweek at home to Real Madrid. Messi, however, made a significant contribution on Saturday, curling home from 25 yards after being fed by Suarez for the home side’s third goal.

📊 [Whoscored] | Lionel Messi has scored eight league goals from outside the box this season, more than 93 of the 97 TEAMS (excluding Barcelona) in Europe’s top 5 leagues.

🔶 He missed 6 league games due to injury. pic.twitter.com/4iqMrAL0jy

Messi then allowed Suarez take the penalty for the fourth goal, a sign of the mutual respect and understanding between both players. The interplay between the two South Americans has not only been a joy to watch since Suarez signed for Barça in the summer of 2014, but crucial to their success.

The 25-year-old Argentine forward certainly brought the fight to Real Sociedad in the second half of a seven goal thriller in Pamplona on Sunday afternoon in which the away side ultimately came out on top 3-4.

The 25-year-old scored twice in the second half and his all-action energetic style of play had La Real hanging on at times in what was an end-to-end encounter.

Avila has netted eight times for Los Rojillos, he also has two assists making him a vital player in Jagoba Arrasate’s side. The Argentine has shown a petulant side at times in the first half of the season, but he is a quality forward when focused.

Levante weathered the storm and took their chances which presented themselves as the game progressed in the second half. The 28-year-old has eight league goals to his name and has been a significant factor in Levante heading into the festive break in ninth position in the table.

Quality all round performance from the 32-year-old Uruguayan striker. Three assists and a converted penalty for Suarez on Saturday meant he had a hand in all four Barcelona goals.

Although he was well marshalled by Real Madrid in last Wednesday’s home tie at the Nou Camp, Suarez has been in good form of late and is third in the league scoring charts behind Lionel Messi and Karim Benzema on 10 goals.

Barcelona will need Suarez to continue to fire after the Winter Break along with Antoine Griezmann who opened the scoring for the Catalans after Suarez squared the ball into the Frenchman’s path on 19 minutes.

Morata’s late backheeled finish to ensure victory away to Real Betis was his seventh league goal of the season. This impressive return has been instrumental in ensuring Atleti finish the calendar year in the Champions League spots. They are in fourth position after the weekend’s round of fixtures.

The 1-2 win at the Benito Villamarin was the third win in a row for Diego Simeone’s side in all competitions. Morata was busy all afternoon and caused problems for the Betis defence throughout the game.

Angel Correa was also in good form and with Joao Felix contributing in the attacking third at various points, Atletico are finally looking like they have more cutting edge in attack.