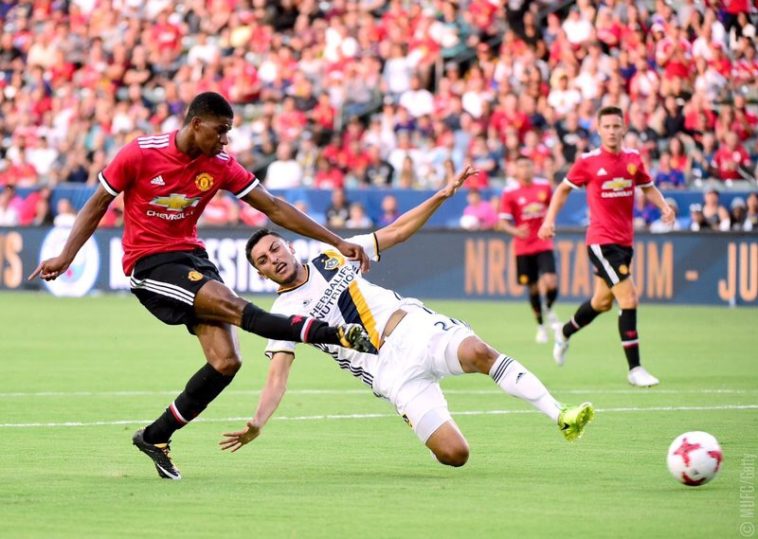 Manchester United got their pre-season campaign underway with a resounding 5-2 win over LA Galaxy over in the USA.

‘Three at the back’ could be the way forward.

United played both halves of football with totally different sides, but kept one thing constant – playing three at the back.

As showcased by Chelsea, as well as an increasing number of clubs in the Premier League, playing three central defenders combined with wing backs gives a great defensive solidity, as well as wide attacking options.

Jesse Lingard was utilised as a left-wing back in the first half to good effect, grabbing two assists, while Tim Fosu-Mensah did well down the right during the second half.

In the first half, United played with three midfielders behind Mata and Rashford, while in the second half, it was two midfielders, with Lukaku and Martial up front, with Mkhitaryan marauding through the midfield.

Two different attacking systems put to great effect by United, all made possible by three at the back. An interesting option for Mourinho’s next season.

Rashford will push Lukaku for the strikers role

£75m striker Romelu Lukaku will undoubtedly be the first choice. However during his 45 minute spell, Rashford certainly staked his claim for a starting berth.

Two goals, including one inside the first three minutes showed Mourinho’s what the 19-year-old has to offer.Pace, strength and excellent first time finishing.

However the Englishman will be disappointed he didn’t bag his hat-trick, and will need to develop more composure. He was clean through on goal, but his effort was hit straight at the ‘keeper, when it looked easier to score his third.

The Armian, deployed and a number 10 during the second half behind Romelu Lukaku and Anthony Martial, ran the show!

He picked up some fine positions and made some driving runs, carving the American side open time and time again, even bagging himself a goal.

He had a disappointing and frustrating campaign last season, however, in this game against the Galaxy, Anthony Martial had a fine 45 minutes.

Playing up front with Romelu Lukaku, the Frenchman grabbed a goal and an assist, and put in an fine all round performance.

Maybe its his time to fulfil his potential under Jose Mourinho this season.

Yes, the players only played 45 minutes each, and yes it’s against a team struggling in the MLS, but Manchester United looked sharp.

Not only did the players look relatively fit against a side midway through their domestic season, but they looked clinical in front of goal, something they were heavily criticised for last season.

They don’t have long to wait for their next fixture, playing Real Salt Lake in 48 hours time. Jose is expected to play two different sides once again, building up to fitness ahead of games against the European heavyweights Man City, Real Madrid and Barcelona.