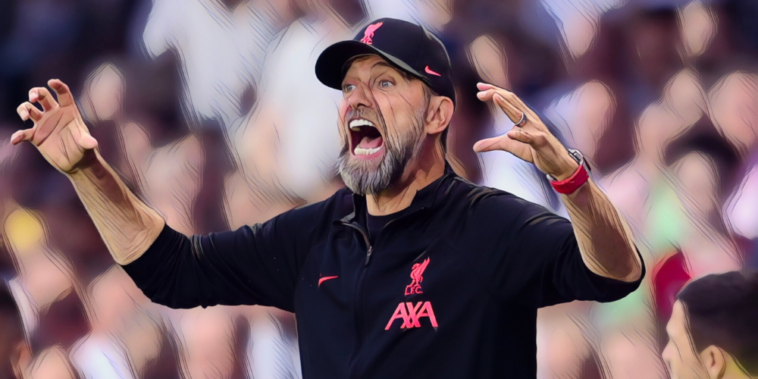 Liverpool’s stuttering start to the season continued after Jurgen Klopp’s side played out a thrilling 3-3 draw with Bright at Anfield today.

Klopp had spent much of his pre-match press conference defending his right back Trent Alexander-Arnold after the 23-year-old’s omission from the England side in midweek. However, just four minutes into today’s game Alexander-Arnold was left on his backside by Leandro Trossard before the Brighton attacker fired his side ahead with his left peg.

In the 17th minute Torssard would again fire past Alisson with his left from a similar angle to give new Seagulls boss Roberto de Zerbi a dream start to life in the Premier League.

Just after the half-hour mark Roberto Firmino finally gave the Anfield crowd something to shout about when he latched onto a poor touch from Mohamed Salah and stroked home from 12 yards out.

10 minutes into the second half and the brilliant Firmino dragged his side level. Luis Dias broke forward down the left and laid it inside to the Brazilian, who duly beat his man and slotted a left-footed effort past Robert Sanchez and into the bottom corner.

On 63 minutes Liverpool would complete the comeback when Sanchez made a mess of trying to collect an Alexander-Arnold corner before the ball struck the unfortunate Adam Webster and flew into the Brighton net.

Brighton refused to go away and in the 83rd minute, the hugely impressive Trossard secured his hat-trick. Once again Brighton found joy down Liverpool’s left side and after a cross made its way across the area Belgium international Trossard fired a half volley into the roof of the goal.

Alexander-Arnold almost redeemed himself late on but his long-range free-kick hit the post and the game ended all square.

Speaking afterwards Reds boss Klopp admitted a draw was a fair result, but also backed his side to get better after their struggles at the start of this season.

“Bad start from us. Very good start from Brighton, who were full of confidence,” Klopp told BBC Sport.

”It looks like it goes in one direction then we find a way back into the game. We were getting closer to what we wanted to do. We put them under pressure, not with free-flowing football, but we have to admit Brighton had a lot of chances and it was a deserved point for them. I’d love to talk now after winning 3-2 but we have to work harder and be more consistent to get three points.

If it wasn’t for Alisson Liverpool could have conceded 7 or 8. Alisson was Liverpool’s best player yet Liverpool conceded 3. Speaks volumes.

“I haven’t got the perfect explanation otherwise we wouldn’t have the problem, which is obvious. We didn’t expect the formation to be honest. But of course usually you can get through it.

“Directly after the game it is a massive knock. Now, slowly but surely, we feel that is just the situation and we will get through. We got a point and not what we wanted.

“We are a dominant team and want to have the ball so when you give these goals away I know it is a problem. We have to find the solutions. We have to keep going. It is nothing in our DNA. It just happens and now it happens more often. This is a period where we struggle. We have to fight through this situation. We cannot fight anymore today though we just have to admit.”