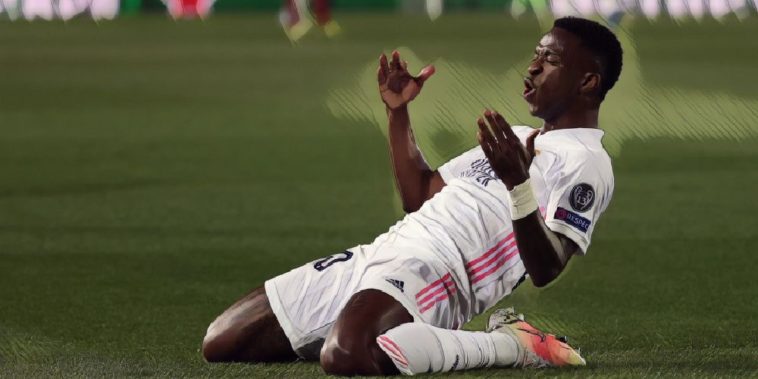 Liverpool slipped to a disappointing 3-1 against Real Madrid in the Champions League quarter-final first leg, a repeat scoreline of the 2018 final between the two sides.

After what has been a difficult season for Liverpool, optimism was raised for their trip to Madrid, the Premier League side having put in an assured display against Arsenal at the weekend, while Real Madrid were without regular first-choice centre-back pair of Sergio Ramos and Raphael Varane.

It was however the Spanish side who started by far the brighter and they would go ahead on 27 minutes through Vinicius Junior. While it was the 20-year-old who will take the headlines, the goal was created by a wonderful, inch-perfect raking pass from deep by midfield maestro Toni Kroos, picking out the darting run from the left of the Brazilian who controlled the ball with his chest, before finishing past Alisson.

Nine minutes later and it was another ball from Kroos over the Liverpool defence that led to Real Madrid’s second, Trent Alexander-Arnold making an absolute mess of his attempted header which was pounced upon by Marco Asensio, the Spaniard lifting it over Alisson before poking into an empty net from close range.

Liverpool were poor for large parts for the first half, but they came out brighter after the interval, and within five minutes of the restart they pulled back what could still prove to be a vital away goal. Gini Wijnaldum embarked on a driving run from midfield before slipping the ball into Mohamed Salah, before the Egyptian prodded past former Chelsea ‘keeper Thibaut Courtois, whose outstretched right hand couldn’t prevent the ball from going in off the underside of the bar.

However, Real Madrid would restore their two-goal advantage thanks to some more slack defending from the English champions, Luka Modric strolling into the Liverpool penalty area, squaring it Vinicius who stroked the ball past Alisson first time from 12 yards with 25 minutes still to play.

It could have been more for the 13 time European champions, and speaking afterwards, Reds boss Jurgen Klopp didn’t have much positive to say about his side’s performance in the Estadio Alfredo di Stefano.

Toni Kroos created more chances than any other player in the Champions League this evening (4).

Casemiro made more tackles than any other player in the Champions League this evening (8).

“If you want to go to the semi-final, you have to earn the right to do so,” he told BT Sport. “We didn’t do that tonight, especially in the first half. The only good thing I can say, apart from the goal, is it’s only the first half of the tie.

“We made it too easy for them. These mistakes can happen. We didn’t deserve a lot more but that one goal and the second half was OK. It gives us a lifeline.”

The German also confirmed his first half substitution of Naby Keita was a ‘tactical’ change given his side’s poor showing.

“It’s not a big story. I don’t like it. He wasn’t the only one. It was tactical. I could have done a few more changes in that moment.”

Asked what his side will need in the second leg, he added: “Intensity with the ball especially. You cannot defend the speed of Real Madrid when you give them the ball at the wrong moments. If you lose ball in the right moment it’s OK. We lost the ball, so many easy passes. You have really quick and world class players in one on ones. We have to be better in possession.”

Next up for Liverpool is a home game against Aston Villa at the weekend before the second leg against Real at Anfield next week.

Read – Remembering all of Liverpool’s previous meetings with Real Madrid