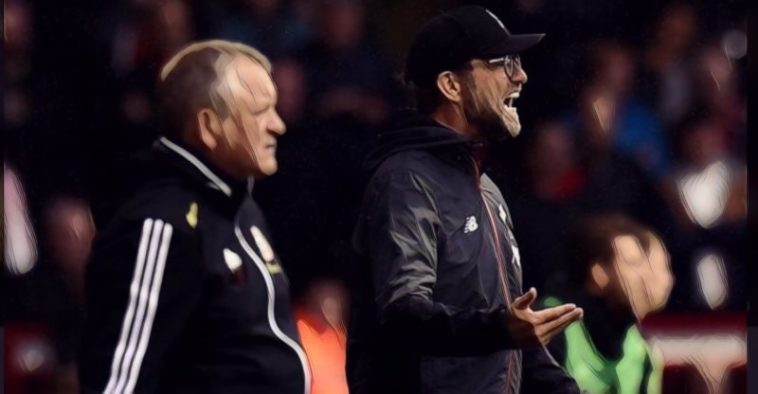 Jurgen Klopp was full of praise of Sheffield United after his side came away from Bramall Lane yesterday with a hard-fought 1-0 win.

Chris Wilder’s newly-promoted Blades have won plenty of plaudits since their long-awaited return to the Premier League, sticking to their unique and inventive tactical approach.

Saturday’s encounter was a pulsating affair played out in front of a raucous Bramall Lane crowd, with United pushing league leaders Liverpool as close as anyone so far this season, and Klopp’s lauding of Wilder’s side was far more than the type of faint praise often handed out to newly-promoted teams.

Klopp compared the Blades to his former side Mainz, describing in his own unique way that their ability and fighting spirit means nobody can stop them ‘enjoying the riot’ on their home patch.

“I saw [the last] three games of theirs so that means I knew as much as I could. I am very impressed, to be honest. Very impressed,” Klopp told liverpoolfc.com.

“The way they play, the way they fight. I was a manager at Mainz and when any team came to Mainz, we thought whatever they did nobody could stop us enjoying the riot.

“Obviously the relationship between manager and players is good. Chris [Wilder] is quite animated; it is my first game against him and I thought I am loud, but he is really loud! The boys listened and they go for it. That was impressive.

“Of course, it is easier to enjoy when you’ve won the game but anyway, I am sure we will come here again.”