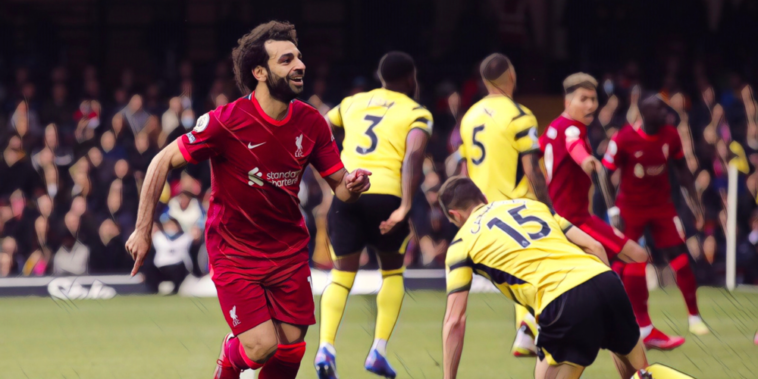 Mohamed Salah netted another wonder-strike and Roberto Firmino bagged a hat-trick as Liverpool condemned Claudio Ranieri to a losing start as Watford boss with a dominant 5-0 win at Vicarage Road on Saturday.

Jurgen Klopp’s preparations for the encounter had been hampered by the absence of both Fabinho and Alisson following their recent Brazil involvement, although the visitors were seemingly unaffected by that disruption as they took total control in the opening exchanges.

That dominance was rewarded inside 10 minutes as Sadio Mane fired his side ahead, the Senegal international latching onto Salah’s outrageous outside-of-the-boot through ball and dispatching first-time for his 100th Premier League goal.

Aside from a few brief breaks on the counter, the newly-promoted side struggled to get any sort of foothold in the game, as the away side went on to bag a deserved second just before the break after Firmino rounded off an excellent sweeping move.

The returning Brazilian added his second – and Liverpool’s third – just after the break by steering in for another close-range finish, before man of the moment Salah netted a delightful effort just minutes later to continue his blistering form.

Picking the ball up on the edge of the box, the Egypt international jinked his way through a sea of Watford defenders – as he had done against Manchester City two weeks ago – sending the sliding Craig Cathcart the wrong way before lashing in past Ben Foster for his seventh league goal of the season.

With Ranieri’s welcome party well and truly spoiled, the hosts finally started to play some football and attempted to snatch a late consolation to soften the blow, yet saw substitute Joao Pedro dink an effort over the crossbar, before the youngster was brilliantly denied by stand-in stopper Caoimhin Kelleher.

The footwork is magical, the finish is sublime.

He had the Watford defence on strings! 😱 pic.twitter.com/tBWPWWOxeX

It would, however, be the Reds who added further gloss in the dying seconds as Firmino completed his hat-trick with another simple finish following some good work down the right from young substitute Nico Williams to get past Danny Rose – who had endured a torrid afternoon against Salah and co.

That thumping victory moves Liverpool to the top of the table for the time being and extends their unbeaten run to 18 games in all competitions, with Klopp unsurprisingly full of praise for his side.

“It was good! I cannot say differently,” he told BT Sport. “After an international break it is hard to find the rhythm after playing different systems, but the boys were so good despite only having one session before today.

“I think Watford had ideas, but we didn’t let them play. The goals were really brilliant, there was great attitude, energy and character.

The German also lauded star man Salah following yet another remarkable display, as he insisted that the 29-year-old is now ‘the best’ in the world.

“His performance was massive today. The pass for the first goal was great and the second goal was special.

“He is top. We all see it. Who is better than him? We don’t have to talk about what Messi and Ronaldo have done for world football and their dominance. But right now, he is the best.”

The games come thick and fast for Liverpool as they take on Atletico Madrid on Tuesday night, before a highly anticipated clash with rivals Manchester United on Sunday.