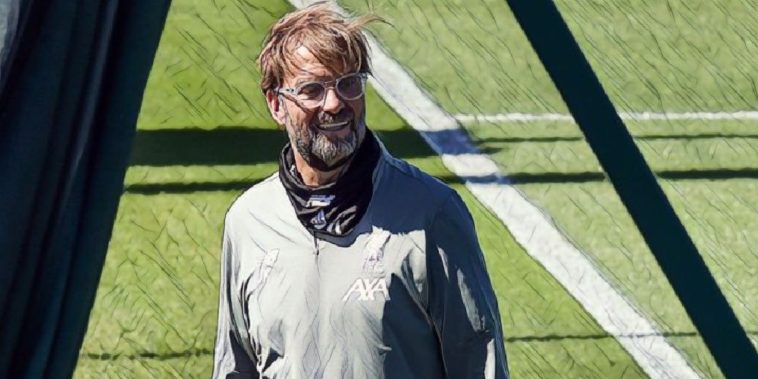 The Premier League leaders returned to their Melwood training ground for the first time since the government’s coronavirus lockdown, working in small groups ahead of a hoped return to action behind-closed-doors next month.

Klopp has now spoken of his excitement after reuniting with his coaching staff and playing squad on Wednesday, admitting it felt ‘pretty special’ to return to the training pitch after weeks away.

“Brilliant, I really enjoyed it. The weather is fantastic, and the boys are in good spirits,” the Liverpool boss told Sky Sports.

“This morning we had to come already changed so I felt a bit like a policeman in my uniform – finally, for the right reasons again. That felt pretty special.

“Then coming to Melwood and seeing all the boys was nice. Before the session we had to give an introduction to make sure everything went in line. It was a short meeting and then a little bit more about the targets and then we started training. That was the best part for a while, really good.

“The first 10 players were here, we have groups of five that train at the same time on different pitches obviously, far away from each other. It looked like football and that is what we want to do.

“For the boys, they had the longest break ever, around nine weeks. The international players usually have around two weeks in the summer, so we need to get used to a lot of things again. But the first impression was really positive.”