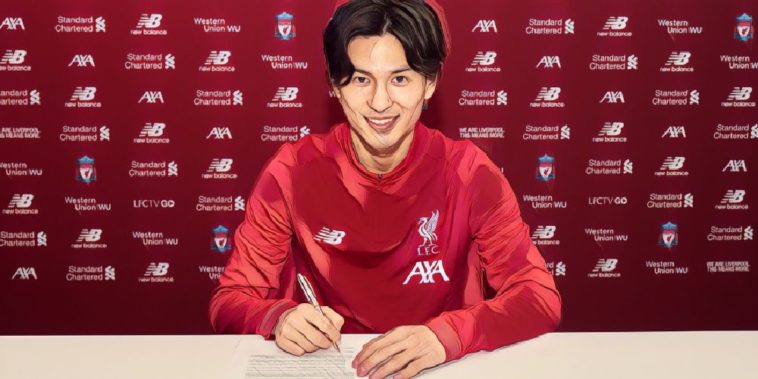 The Japanese international underwent a medical with the club on Wednesday and completed the formalities of his switch from the Austrian champions, Minamino officially becoming a Liverpool player on the first day of the January transfer window.

The 24-year-old impressed in both fixtures between Salzburg and the Reds in this season’s Champions League group stages and will arrive on Merseyside after the Premier League leaders opted to activate his £7.25m release clause, a deal which is being regarded as a major coup across Europe.

Minamino, who will wear the number 18 shirt at Anfield, will add to a wealth of attacking options at the club, Jurgen Klopp expressing his delight at completing the signing of the creative midfielder ahead of the winter window.

“This is fabulous news – a wonderful signing. We are really, really happy about this,” Klopp told Liverpoolfc.com.

“Our supporters have had the chance to see him close up recently so I don’t need to sing too loudly about his qualities as they are already known.

“Takumi is a very quick, very clever player, he finds space between the lines. He is brave with the ball but also brave without the ball – a proper team player. He makes the best of himself for the benefit of others.

“His Champions League experience is a big bonus and coming from the club and organisation he does, we know he’ll be well coached, used to an elite environment and had all the right experiences.

“It is fantastic work by our football operations team in how they’ve handled this transfer. Michael Edwards and the team deserve a lot of credit.

“It’s not hard to see why Salzburg is a favoured destination for players with real talent and hunger. From our experiences dealing with, and facing, Salzburg on and off the pitch in recent months, their reputation as a benchmark modern European club will only grow.

“I’m sure all the Liverpool supporters will go out of their way to make Takumi feel at home in our amazing city and club.

“I am also pretty sure as of now we have added to our numbers of the LFC family in Japan specifically. For those who follow us now because we have one of the country’s most exciting talents, I say welcome – it’s a special club to be part of.”