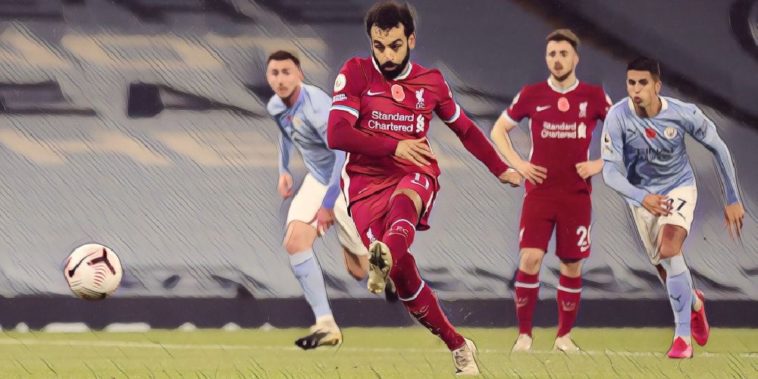 Liverpool and Manchester City played out an entertaining 1-1 draw at a rain-soaked Etihad stadium as Kevin de Bruyne missed a decisive penalty.

It was a frenetic start to the game in East Manchester, and Liverpool took an early lead from the spot after 13 minutes, Mohamed Salah confidently firing past Ederson after Sadio Mane was brought down in the box by Kyle Walker.

City had dominated the ball but had struggled to create too many opportunities in the opening 30 minutes. However, when Kevin de Bruyne received the ball in a pocket of space, the Belgian playmaker picked out Gabriel Jesus who produced an excellent turn to spin Trent Alexander-Arnold before toe-poking the ball past Alisson.

10 minutes later and City had a chance to take the lead with a penalty kick of their own, De Bruyne’s cross striking the arm of Joe Gomez in the box. However, in the most uncharacteristic fashion, De Bruyne stepped up and screwed his effort wide of Alisson’s right-hand post.

After a first half that was at times breathless, the second half was somewhat more controlled, with neither side creating too many clear cut opportunities to grab a winner.

4 – Since a run of 35 consecutive Premier League wins when opening the scoring between February and July, Liverpool have failed to win four of their last seven games when scoring the opening goal (D3 L1). Pegged. #MCILIV pic.twitter.com/pcz5wMMjJ2

Speaking afterwards, Jurgen Klopp was impressed with how his side restricted Manchester City to a handful of chances.

“Super football game to be honest,” he told Sky Sports. “Two top teams ready for a massive fight – energy levels of both teams incredible. You could see after 10-15 mins everybody breathing [deeply].

“I’m really happy – City’s lowest number of chances against us.”

Klopp opted to set his side up in a 4-4-2 formation as opposed to their familiar 4-3-3, and Klopp was delighted with his players adaptation and flexibility.

“We had counter-attacking moments. So many. We obviously didn’t finish it off which is a shame.

“To change a system to play City… the boys are ready to listen, adapt and perform. In a lot of moments we could have created bigger chances.

“We were really good and dangerous. We were ready to make little passes – there were moments we played too many long balls. Time to time we just wanted to get rid of the ball.

The decision to award City a penalty, as well as Leicester’s first penalty against Wolves, has sparked plenty of debate about the interpretation of the handball rule, though the German manager opted against being critical of the decision: “I haven’t seen it yet. Joe said, ‘I cant do anything.’

Next up for Liverpool following the international break is a home game against league leaders, Leicester City.