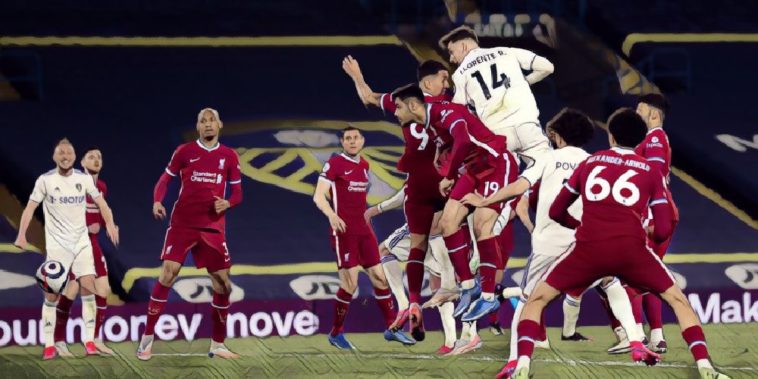 Leeds snatched a late equaliser to earn a well-deserved point against an under-fire Liverpool side on Monday night.

It was a game played against the distracting backdrop of the Sunday evening announcement of the European Super League, with Liverpool one of six English sides leading a proposed money-spinning and self-serving breakaway division between the continents biggest sides.

Despite suggestions that the under-fire champions may be distracted by the talk that has dominated the day’s headlines, it was a thoroughly dominant first half from the Merseyside outfit and they would take the lead just after half-hour mark as Sadio Mane ended his nine-game goal drought.

Diogo Jota’s cross-field ball found the run of Trent Alexander-Arnold, the right-back playing a first-time cushioned pass across the box to evade the onrushing Illan Meslier, to leave Mane with the task of tucking into an empty net from the edge of the area.

Leeds were much improved after the break, and really had Liverpool pinned back for large parts, though the Yorkshire side looked to be lacking the requisite end product

Patrick Bamford would see an effort come back off the bar while Tyler Roberts forced a smart save out of Alisson as it looked as though Marcelo Bielsa’s side would once again be on the wrong side of the result – Liverpool winning an entertaining 4-3 encounter on the opening day of the season.

The Elland Road outfit would however get their just rewards for their second half positivity and dominance, Diego Llorente beating Ozan Kabak to the ball from a corner to head past Alison with just three minutes remaining – his first goal for the club.

Speaking about the match, Jurgen Klopp admitted that Leeds’ equaliser was ‘deserved’

“It is disappointing of course but we cannot say it was not deserved for Leeds,” he told the BBC. “We had big chances in the first half but didn’t use those.

“When you concede a goal it is not nice but it was not that is was not deserved.

“We will fight for the Champions League with all we have and if we can reach it, if not, then if not. This a point more in the end. It is always best to win all the games but if not we have to shake a bit and go again and that is what we will do.”

Leeds players warmed up in specially printed t-shirts to outline their opposition to the plans for the Super League, and the German was once again forced to field questions on the day’s biggest story.

‘Football is for the fans’ pic.twitter.com/xPfmre9z8m

“I said so many things now already,” he said. “We were not involved in the process. We are the team, we wear the shirts with pride. Somebody has made a decision with the owners in world football that we don’t know exactly why.

“There will be reasons, our owners, are not gamblers. We are here, we are the face of the club and arrived here and Leeds fans shouted at us as though we made the decision but we didn’t.

“Things will change in the future, maybe not now, maybe in a few years. Uefa made a decision about the Champions League, they showed me the whole thing and there were more games than before and I said I don’t like but they still did it.

“Fifa plan a team World Cup, when do we play those games? All these things I have said often enough but did it change anything? No. That is the situation.”

Next up for Liverpool, if they haven’t been kicked out of the Premier League by then, is a home game against Newcastle, a game that evokes wonderful memories of the early days of the division.