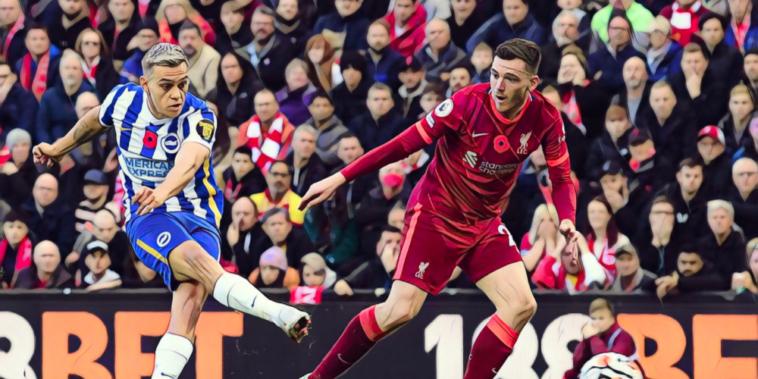 Liverpool maintained their unbeaten start to the season, though saw a two-goal lead pegged back by Brighton as they conceded ground in the title race.

Brighton had the first big chance of the game, with Solly March beating the offside trap and getting into the Liverpool box, and despite being in acres of space, his effort was well saved by the diving Alisson.

The Reds – who hammered Manchester United 5-0 in their last league fixture – did however take the lead after just four minutes. Mohamed Salah, who has been in scintillating form of late, cut-in from the left, and instead of having a go himself, rolled it to Jordan Henderson who was arriving at the edge of the box before the captain stroked a delicious, first-time effort beyond Robert Sanchez.

20 minutes later and it was two as the Anfield outfit looked to be on their way to three points, Sadio Mane heading home a cross from deep from Alex Oxlade-Chamberlain.

Mane thought he had his second and his side’s third with 10 to play in the first half, the Senegalese closing down Sanchez’s clearance, only to see it chalked off for a handball to spare the Spaniard’s blushes.

Instead of being 3-0, Brighton quickly pulled one back to make it 2-1 four minutes before the break, Enock Mwepu seeing his speculative effort from 25 yards loop over Alisson who perhaps lost sight of the ball in the late afternoon sun.

The impressive South Coast club would go on to level the scores 20 minutes into the second half, former Liverpool midfielder Adam Lallana picking out Leandro Trossard in the box, who cut inside his man and fired coolly into the bottom corner.

Speaking after the game, Jurgen Klopp was disappointed to see his side surrender a two goal lead, admitting he didn’t like his side’s ‘body language’ in the second half.

“It feels like a defeat,” he told BBC Sport. “It’s not only because we were 2-0 up and didn’t win, it’s because the game I saw, we scored two of the most beautiful goals I’ve ever seen us score, which were disallowed.

“The pressing goal for Sadio was just unlucky, if you want to teach pressing, you would show this situation. But disallowed for handball, I guess.

“Top moments in the first half where we showed how we can hurt Brighton, played some top passes through the centre and played really good football but were only 2-0.

“In the second half, we were not good enough. The body language I didn’t like it all. It was like ‘oh my God, it’s really tough’. Yeah, it was clear before the game.

“The best way to defend Brighton is to have the ball yourself and play in the spaces where they are exposed, but we didn’t do that and that’s a problem.”

The result leaves Liverpool three points adrift of Chelsea following their 3-0 win against Newcastle, with a Champions League clash against Atletico Madrid up next.