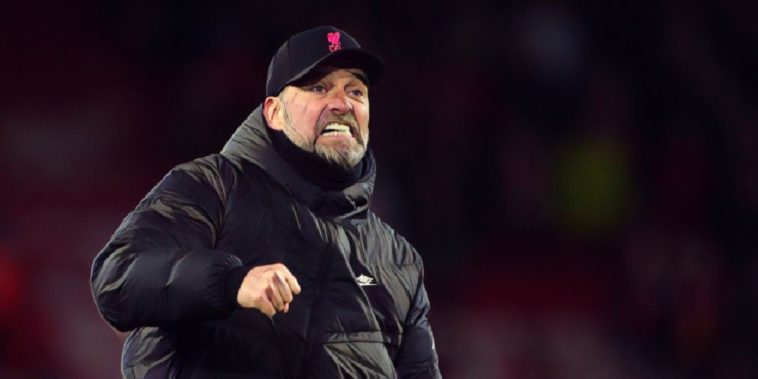 Liverpool ran out 2-0 winners against high-flying Arsenal to move to within one point of Manchester City at the top of the table.

It was a meeting of two of the in-form sides in the Premier League, Arsenal having won their last five games in the division while Liverpool had won all of the last eight coming into this evening’s heavyweight clash.

It was a hugely entertaining start to the game, with both sides quick to close each other down all over the field. The Emirates crowd were buoyed by their side’s tenacious display, though the first half ended without either side creating too many clear cut chances, the only effort on goal coming in just the second minute as a Virgil van Dijk header from a corner was comfortably palmed away by Aaron Ramsdale.

While the first half was good, the second was even better, and Sadio Mane had the ball in the back of the net inside the opening 60 seconds after the restart, though it was swiftly ruled out for offside. Meanwhile, at the other end, Reds keeper Alisson was forced into a superb save to deny Martin Odegaard following a dreadful backpass by Thiago Alcantara.

Just minutes later though, the Spaniard did produce a pass of quality, sliding the ball into the path of Diogo Jota who advanced into the left channel, before firing in at the near post, though Ramsdale really should have kept it out after getting a firm hand to it.

Jurgen Klopp had the luxury of being able to call on Mohamed Salah and Roberto Firmino from the bench, and six minutes after their introduction, the Brazilian doubled his side’s lead. The Merseyside outfit won the ball back high up the field, with Andrew Robertson eventually putting in a delivery from the left with Firmino’s deft touch steering it underneath Ramsdale from inside the six yard box.

The lively Gabriel Martinelli dragged a shot narrowly wide late on as Arsenal looked to get back into the game, and speaking afterwards, Jurgen Klopp praised out the performance of right-back Trent Alexander-Arnold who has often seen his defensive abilities questioned, while admitting his side weren’t at their best in the first half.

Longest winning runs in a top-five European league this season:

“Obviously both teams had spells of possession where the other team was patient and didn’t want to step out, but we had to,” he told Sky Sports. “Trent did exceptionally well against Gabriel Martinelli. If anybody tells me Trent can’t defend, I’ll knock them down. I don’t know what the boy has to do anymore.

“In the first half we didn’t have enough players between the lines. The movement was not exactly what it should have been. It was not a big problem because we were prepared for a really difficult game. The speed Arsenal have and their physicality – they’re a really talented team, so I wasn’t angry at half-time. I just wanted to change a few things.

“It was a sensational save from Alisson. For me it was a goal, to be honest. With their quality, they often finish situations like that. Ali didn’t let it happen. When you always try to find a football solution like Thiago – I would have kicked the ball into the stand probably. He tried to keep it in the game.”

“Two top class teams met each other, both with a football idea, both trying to be dominant in possession. If you don’t close the centre properly the ball is in the last line. There were also four or five offside situations that weren’t whistled. It’s really tricky, it’s a delay that doesn’t help to be honest.”

The win moves Liverpool to within a point of Manchester City at the top of the table, having closed the gap down from 14 at one point.

“We’ve obviously had a good period. It’s what we need. We’re one point [behind Man City], but it’s still the same. We have to win football matches. We then face City, then all the others. Hopefully, all the players come back fit from international duty. Then we have an early kick-off against Watford. It’s better to be one point behind than 14 points.

“The only thing I’m really interested in is how we can prepare for the next game, how we can get through this. It’s so difficult – I think it’s game number 13 since we met Arsenal in the Carabao Cup. For them it’s seven – that’s six more games for us. We don’t complain about it, we wanted it like this. Let’s see how it goes.

Asked if he is ‘proud’ of his side constantly pushing Manchester City to the limit, he replied: “In ten years, do you think somebody will say you should be proud [of finishing second by one point]? Probably not. We know we have a special group here and we’re trying to squeeze everything we can out of the situation.”