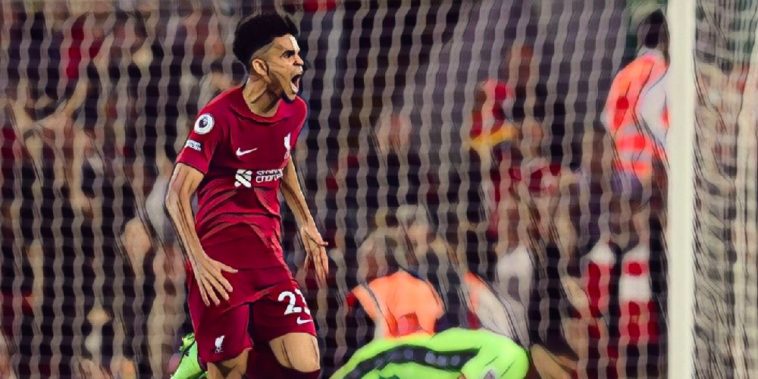 Darwin Nunez was shown a straight red card as Liverpool were held to a 1-1 draw at home by Crystal Palace.

Liverpool’s season got underway with a surprise 2-2 draw against Premier League new boys, Fulham, and while the Reds weren’t at their best last weekend, they came out of the traps firmly on the front foot at Anfield with Crystal Palace being forced into plenty of last-ditch defending to keep the scores level.

However, after an almost totally dominant half an hour, the hosts were hit with a sucker punch. Eberechi Eze superbly controlled the ball, skipped past a challenge from Fabinho, before threading a wonderfully weighted pass to find a perfectly timed run by Wilfried Zaha, before the Crystal Palace talisman burst into the box and expertly fired low past Alisson to stun the Anfield crowd.

Liverpool saw plenty of the ball but didn’t quite look as dynamic and intense in the early stages of the second half, though there was a major flashpoint 12 minutes after the interval, as the Reds record signing, Darwin Núñez, was shown a straight red card after he needlessly head-butted Palace centre-back, Joachim Andersen.

Despite being a man light, the hosts quickly hauled themselves level with a moment of individual brilliance. Before the game, Jurgen Klopp talked up the potential of Luis Diaz to take on the goalscoring mantle, and the Colombian certainly proved that after he danced past around five Palace players on the edge of the box, before rifling a fantastic finish beyond Vicente Guaita.

Both sides fashioned chances to snatch a winner, with Zaha hitting the post while Salah went narrowly wide from range, though the game ultimately ended honours even, with this being the first time Liverpool have failed to win either of their opening two games in 10 years.

“It was a really good start, exactly what we wanted, a lot of the kind of football we wanted to play, showing a lot of desire, we wanted to put it right, it was all there,” he told Sky Sports.

“We were then unlucky in situations. The game plan for Palace was obviously defending deep, to have five at the back, get men behind the ball and go for the counter attack. It is difficult with the speed of Zaha.

“The second half again started positive, but getting the red card was a knockback. Of course, it was a red card, he was provoked, but that is not how he should behave.

“Then we equalise four mins later. A massive game from us, with 10 men, putting in such an effort. The stadium was there. My real feeling now is that I am proud.

“Everything that happened in the week it was like there was a witch in the building. Everytime, somebody else has problems.”

Asked about Nunez’s red card, Klopp said: “Look, he knows that himself. I will talk to him. It makes no sense to talk about it in public now. It’s absolutely not the reaction we want to see. The Premier League will do that to him.

Darwin Nunez on his Anfield debut:

“I don’t know how long he will be suspended, so we will use it for physical work – not as a punishment – but to make him even stronger.”

The German was full of praise for goalscorer Luis Diaz’s ‘incredible goal’ and all-round display.

“Luis played a super game. Not just the goal, but he played for three or four players. Incredible goal, and we needed that.