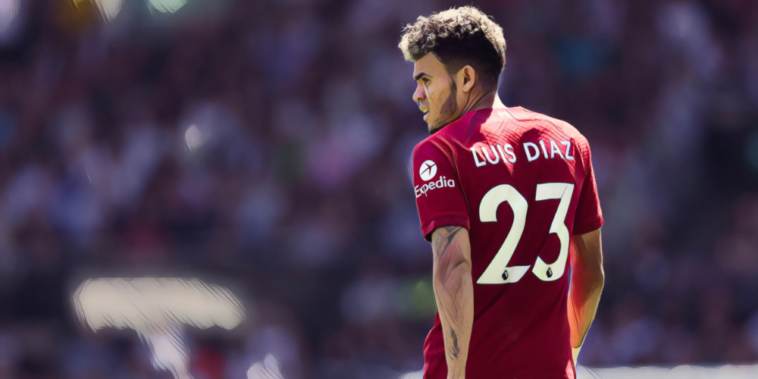 Jurgen Klopp has talked up Luis Diaz’s potential and has backed the winger to be a big goal threat for Liverpool this season.

Diaz signed for Liverpool from Porto in January and made an immediate impression across his first six months in the Premier League, with the Colombia international taking little time to adapt to Klopp’s side and system.

Diaz has scored four goals in 14 league games for the Reds, but Klopp has backed the winger to evolve into a major goal threat for his side this season. The 25-year-old scored 14 goals in just 18 league appearances across the first half of the 2021/22 campaign for Porto, but has so far been unable to replicate that prolific record in English football.

Speaking ahead of the club’s clash with Crystal Palace, the Liverpool boss outlined his belief that Diaz can replicate the departed Sadio Mane and become a consistent Premier League goalscorer.

“Definitely, that is his quality. We need to see it but of course that is his potential,” Klopp told his pre-match press conference when asked if Diaz could score 15 goals this season.

“We work on it but not with Luis specifically – we don’t take him out because the other two scored [Salah and Darwin Núñez] and he didn’t so we show him how. That’s not necessary. You can’t force it. People asked: ‘How can you play without Sadio?’ when in November/December everybody was thinking about when he would score the next goal. You just let it go.

“You see the situations he [Díaz] had [at Fulham], big chances, and he was unlucky. He is in a really good shape and that is more important. It’s not that I tell him after a game, ‘You should have scored here or there’. The boys know that in the moment. It happens. It’s a normal process.”

Klopp discussed Diaz’s development in his side and believes Liverpool’s system will soon bring the best from the Colombian around goal. The German used the example of Mane, who developed into a prolific goalscorer following his arrival at the club from Southampton.

“He [Díaz] obviously has the quality and the potential and if we can put the miles in his legs during pre-season that will help in the long term. That’s what will happen but we are not about the long-term, we are about now. He just needs one goal and then we will go from there.”