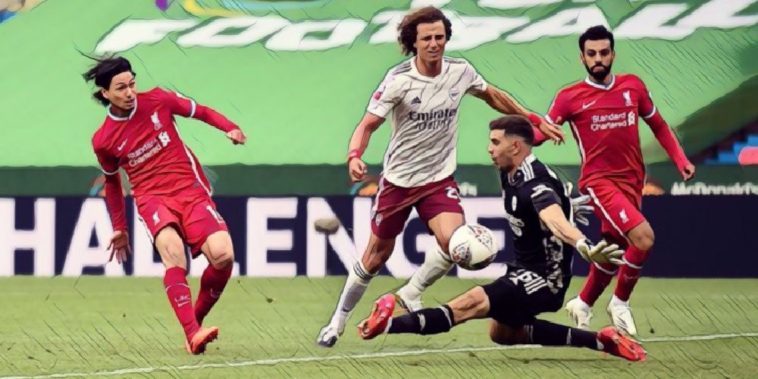 Jurgen Klopp insisted he was ‘pleased’ with aspects of Liverpool’s performance, despite slipping to defeat on penalties in the Community Shield against Arsenal.

The delayed end to the season meant both sides had been limited to minimal rest and recuperation, although the game started at a decent pace and Liverpool thought they had taken an early lead, but Virgil van Dijk’s effort from inside the box was chalked off for offside.

The Reds would then go behind after just 12 minutes, Arsenal playing the ball out from the back, before Bukayo Saka sprayed a delicious cross-field ball from right to left to Pierre-Emerick Aubameyang. The Gabon international drifted inside before sumptuously curling the ball past Alisson from the edge of the box, though young Liverpool right-back Neco Williams could have perhaps done more to close the prolific striker down.

As Klopp had predicted pre-match, Liverpool were far from their sparkling best, and while they created a few chances – particularly through Andy Robertson down the left – they came up against an Arsenal side who looked well drilled at the back.

The Gunners also looked promising going forward, though 21-year-old striker Eddie Nketiah spurned a couple of first-half chances to extend the lead. The best came after a driving run from Xhaka found the impressive Saka down the right, who in turn found the Lewisham born forward on the edge of the box, though his low effort was well saved by Alisson.

In the second half, Liverpool number nine Roberto Firmino curled his effort from range agonisingly wide, before the Premier League champions finally got a shot on target in the 55th minute – Andy Robertson’s raking ball from deep finding the onrushing Sadio Mane who got in behind Rob Holding, only to be thwarted by Emiliano Martinez, though replays suggested that it would have been ruled out for offside.

Jurgen Klopp’s side finally started to click in the latter stages of the game, and hauled themselves level with 17 minutes to play, January signing Takumi Minamino linking up with Mohamed Salah before the Japan international smartly tucked the ball home for his first goal in English football.

Arsenal ended the game strongly and created a number of promising chances, though were unable to find a breakthrough, Joe Willock’s close-range header the pick of the late chances. Willock’s effort would ultimately be the last of the game and the tie went to penalties.

The Gunners would claim their 16th Community Shield with five flawless spot-kicks, Liverpool’s young striker Rhian Brewster being brought on for the shootout only to see his powerful effort crash off the top of the bar, leaving Aubameyang to seal the victory.

Speaking afterwards, Klopp said he was pleased with aspects of his side’s performance given the lack of preparation time, though lamented his side’s lack of sharpness in front of goal.

“We were here to win,” he told BT Sport. “I hope that was obvious. We lost the competition because of penalties and because we didn’t use our chances. We could have scored earlier and had the game in the right direction. Time was not enough.

“In parts, I was pleased. I know what we have done and what I expected from a physical and tactical point of view. We played against a defensive block and we had to have fresh legs and make the right decisions. All normal. Another two weeks to prepare.

“We had to get control back and we had that in the second half. Arsenal had some good build-up and we had to work hard. We had two or three big moments and we didn’t finish it off. They decide games and we know that.”

Klopp was however pleased for goalscorer Minamino, who has taken time to settle since moving to English football from RB Salzburg last January: “It was big day for him and us,” he said. “Only thing he lacked for us was a goal. He’s had some moments and the shape he is in is obviously good. The goal was the logical step for him. I am very pleased for him. Very important for us and him to make this step.

He is now the first-ever ?? Japanese player to score for Liverpool pic.twitter.com/nEP9cSSOOH

“Taki can have an impact, that is why we signed him, I don’t want massive pressure on him, there is no need for it. He is a really useful player. He is good in small spaces, his first touch is exceptional and his decision making between the lines is good. He has had to adapt.”

The German also had some words of support for youngster Brewster following his penalty miss.

“We all have to learn and prove we can deal with defeats. If he would have scored and someone else missed, it’s the same theme. There are bigger reasons than that. Missing it like this is possible. I’ve never seen him miss one but today it happens, it can.

“This will not harm Rhian. If anyone is to blame, it is me. But I wanted him in the position because he is a real finisher and confident. Today, not. That happens in football and life.”

Read – Will Thiago be next? Rating the players to play under both Guardiola and Klopp