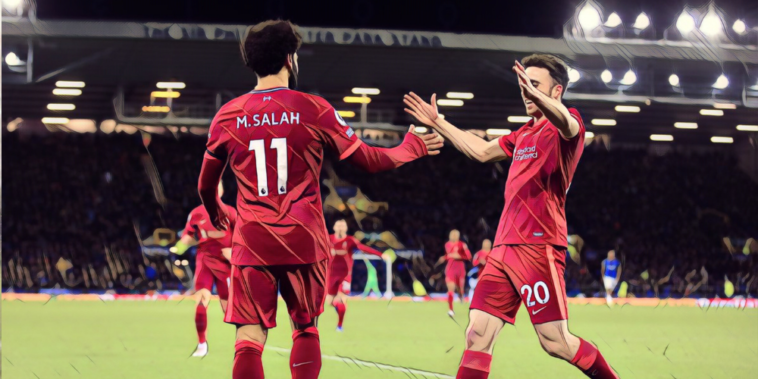 Jurgen Klopp has opened up on Mohamed Salah’s improved decision making in front of goal and has hailed the recent performances of Diogo Jota.

Salah continued his superb start to the season with two goals in the 4-1 win over Everton in midweek, extending his advantage as the Premier League’s leading scorer with a clinical brace at Goodison Park.

The Egyptian international has now scored or provided an assist in 12 consecutive league fixtures, becoming just the third player to have achieved the feat in the division, taking his goal involvements for the season to 21.

Salah is also the leading assist provider in the Premier League this season and, ahead of this weekend’s trip to Wolves, Klopp has opened up on the 29-year-old’s improved decision making around goal after being asked if they had spoken about the issue.

“We didn’t have a specific talk on that because it wasn’t necessary,” the Liverpool boss said at his pre-match press conference.

“These things happen naturally. It was never a criticism from us that he was too selfish or whatever because he never was.

“He is calm enough and he developed technically again so he has more time to see the right things in the different situations. Very often he makes the right decision.”

Klopp also praised Diogo Jota, who will return to former side Wolves this weekend in fine form. The Portugal international has made a major impression since arriving in a £40m deal from Molineux in 2020 and has scored four goals across his past three league appearances.

“He has personality, he’s really smart, organised, structured in a nice way.

“When I saw him first I thought he’d be a player for me. He’s so intense in all situations, technically on a great level. He has incredible quality.”