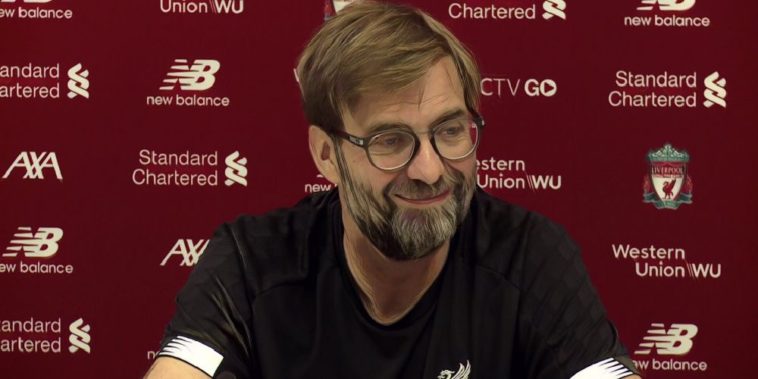 Jurgen Klopp has joked that Manchester United are the ‘only one’ who want to face his Liverpool side at present, after counterpart Ole Gunnar Solskjaer claimed his side are relishing this weekend’s fixture between the two rivals.

Klopp’s league leaders travel to face Solskjaer’s struggling side at Old Trafford this Sunday, looking to maintain their eight-point advantage at the top of the division and equal Manchester City’s record of 18 successive Premier League wins.

By contrast, Manchester United are currently enduring their worst start to a season in 30 years, having won just twice in their opening eight league fixtures.

United boss Solskjaer has said that the meeting with their North-West rivals is the ‘perfect game’ to help get their season back on track, but ahead of what is likely to be a fiercely contested occasion, Klopp has joked United are the only team who to want to face his in-form side.

Speaking in his pre-match press conference, the Liverpool boss said was asked about the Old Trafford atmosphere: “We like to use the atmosphere in our stadium it is incredibly helpful. Old Trafford is not too bad either.

“They said it – we are the perfect opponent.  I don’t think there are too many teams who want to play against us at the moment – it looks like Man United are the only one!”

The meeting between the country’s two most successful sides is widely recognised as the biggest fixture on the English footballing calendar, and Klopp used an interesting analogy to explain how he is anticipating locking horns with United once more.

“How much do I enjoy these type of occasions? A lot! It’s the salt in the soup,” Klopp added.

“Would love to prepare this game with a full week. But now we have an international break – same for both teams.

“The players from the international duty they all came back healthy which is very important. So we have three or four days with the full squad to prepare which is a little bit comfortable at least. I love it.”

Guardiola or Klopp? Scholes reveals who he thinks is the best manager in the world