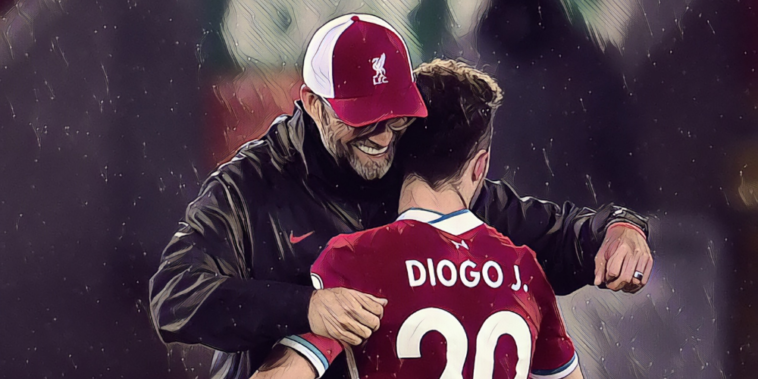 Jurgen Klopp has provided an injury update on Diogo Jota and Joel Matip ahead of Liverpool’s FA Cup third round clash with Aston Villa on Friday night.

Liverpool have been hindered by a succession of injuries this season with both Jota and Matip having joined the club’s list of absentees in recent weeks, with Klopp confirming that tomorrow’s trip to Villa Park will come too soon for the pair.

Jota has been sidelined since suffering a knee injury in the Champions League draw with Midtjylland in early December, and Klopp revealed that the summer signing is still a ‘few weeks away’ from a first-team return after undergoing surgery.

“It will still take time, he is still wearing a brace, so that means he is still a few weeks away from team training,” he said at his pre-match press conference.

“There is nothing really to say, it takes time. There was no surgery needed, which was good, but it was a proper injury.

“It is not a little knock or something; no, no, and it will still take time. There is no real timeframe there.”

Matip sustained an adductor strain during the 1-1 draw with West Brom on December 27 and missed the defeat to Southampton on Monday, the loss of the defender a major blow and leaving the Reds without a recognised senior centre-back amid the long-term absences of Virgil van Dijk and Joe Gomez.

Klopp provided a positive update on the fitness of the 29-year-old, however, insisting the centre-back could return for the champions’ crucial Premier League clash with Manchester United on January 17.

“Yes, we will try working on that obviously. Until the United game we still have nine days around about, so we try,” he said.

“He is in a good way but if it will be United or a few days later, I don’t know. After the United game we will obviously play every three days again, so I think that’s pretty sure, but for the United game, we will see.”

The game between Liverpool and Villa could, however, be in doubt with news that Aston Villa’s training ground has been closed due to a ‘significant’ outbreak of Covid-19, though the FA have insisted ties must go ahead if a team have 14 players available.