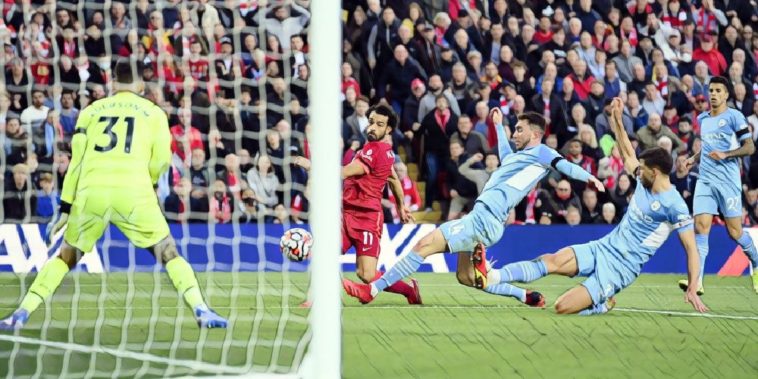 Liverpool maintained their unbeaten start to their Premier League campaign as they played out a thrilling 2-2 draw with title rivals Manchester City on Sunday.

Jurgen Klopp unsurprisingly named an unchanged side from the team that put five past Porto on Tuesday night, with James Milner continuing at right-back against his former club in the absence of Trent Alexander-Arnold.

The versatile veteran was handed a tough time of it in a difficult first-half for the hosts, with Phil Foden causing all sorts of problems down the left-flank for the away side as City enjoyed a dominant start to proceedings at Anfield.

Amid that spell of pressure, Bernardo Silva produced a superb weaving run before teeing up Foden inside the box, yet the young Englishman could only fire his effort straight at Alisson, while Kevin De Bruyne squandered an excellent chance to header home at the back post.

Foden then thought he should’ve been awarded a penalty after a clumsy trip from Milner, although replays appeared to show that the foul took place outside the box, before the City starlet got in behind his man once again following a sensational pass from Ederson, only to be denied by a brilliant tackle from the onrushing Alisson.

Having struggled in the opening period, the home side noticeably improved after the interval with Diogo Jota seeing his early effort beaten away by the opposition ‘keeper, before that bright start was rewarded as Sadio Mane fired his side ahead after an excellent threaded pass from Mo Salah.

The visitors then hit back with Foden getting the goal that his performance deserved with a fine finish from the angle, before the typically lethal Salah continued his strong early-season goalscoring form to fire his side back ahead.

That lead would last just a matter of minutes, however, with Kevin De Bruyne’s strike from the edge of the area deflecting in off an unfortunate Joel Matip to set up a dramatic and tense finale, with both sides seeking that much-coveted winner.

It looked as if that goal would come through Fabinho with less than five minutes to play, yet the Brazilian was denied by a stunning, sliding block from Rodri, with the two rivals forced to settle for a point after a hard-fought and thoroughly entertaining encounter.

An unbelievable block from Rodri. 🤯 pic.twitter.com/bH7pwzzsSw

Speaking after the match, Liverpool boss Jurgen Klopp admitted he was content to have walked away with a point, after what was a difficult first-half for his side.

“I was most happy in my career about the half-time whistle. It was never planned that we played like this and we needed half-time and we used half-time and played a really good second half.

“Man City with the ball is a proper team. There are ways to defend it. They had chances clear but they didn’t score from that. It gives you a really bad feeling which leads to not playing football. We had long balls which didn’t make sense. All these things we changed in the second half immediately. We were now in the game and scored wonderful goals with the ball.

“The message was to play the extra pass. We didn’t do that in the first half at all.

“Do we want to win a game like this? Yes. We have to admit today the point is completely fine.”

In a thrilling second-half, the game’s best goal came courtesy of the in-form Mohamed Salah, who weaved his way past the City defence to put his side ahead with what his manager described as a ‘world-class’ finish.

“Both were pretty good,” he said. “The biggest chance we didn’t use. I have no idea how Rodri blocked the ball. For me the ball was in, but it’s all fine.

“If Leo Messi or Cristiano Ronaldo score that goal then the world says yes because it’s world-class. He (Salah) is one of the best players in the world, that’s how it is.”

One contentious moment prior to Salah’s strike saw James Milner perhaps somewhat fortunate not to be shown a second yellow card for a foul on Bernardo Silva, although the German claimed he hadn’t seen the incident.

“Pep got a little bit outraged over that. I didn’t see but I saw Pep’s reaction obviously but I didn’t know exactly why he did that. Milly did incredibly well first half and it is not easy to defend these guys.”

Liverpool are next in action away at Watford on Saturday 16 October, following the international break.