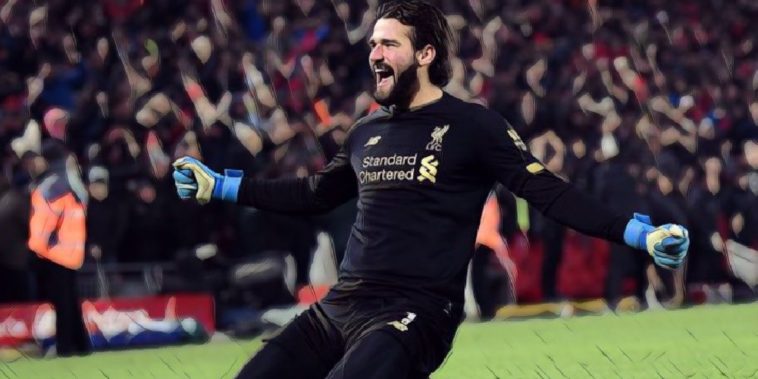 Jurgen Klopp has explained how goalkeeper Alisson Becker has ‘exceeded expectations’ since joining Liverpool in a then world-record deal in 2018.

The Brazilian international has enhanced his reputation as one of the best goalkeepers in world football since joining the club from Roma, winning the Champions League in his debut season on Merseyside and helping the Reds to Club World Cup success in December.

The 27-year-old’s commanding performances have brought solidity to a Liverpool backline that has seen the club emerge as arguably the finest team in Europe, Klopp’s side currently 13 points clear at the top of the Premier League ahead of tomorrow night’s clash at Wolves.

Alisson provided an assist for Mohamed Salah during last weekend’s victory over Manchester United, and Klopp was full of praise for his number 1, but not only for his abilities between the sticks, but for his qualities ‘as a person’.

“As a goalkeeper, we knew what we’d get. He’s made steps but that is normal,” Klopp told his pre-match press conference.

“As a person, he as exceeded expectations. He is an amazing guy.

“We have a lot of really good guys but he is a really special person. His character, how calm he is, helps us a lot. He makes the difficult things look easy.

“A fantastic boy, a fantastic goalkeeper and good to have him here.”

Alisson’s assist for Salah sealed victory over their north west rivals on Sunday and sparked wild celebrations, the goalkeeper racing down the length of the pitch to be first to congratulate his teammate in scenes described as ‘great’ by the Liverpool boss.

“It was great, he was the first there,” Klopp said. “It was so late in the game, the others thought it was too tough to sprint there but he had all the power.

“I didn’t actually see it during the game, I saw it later. Good.”