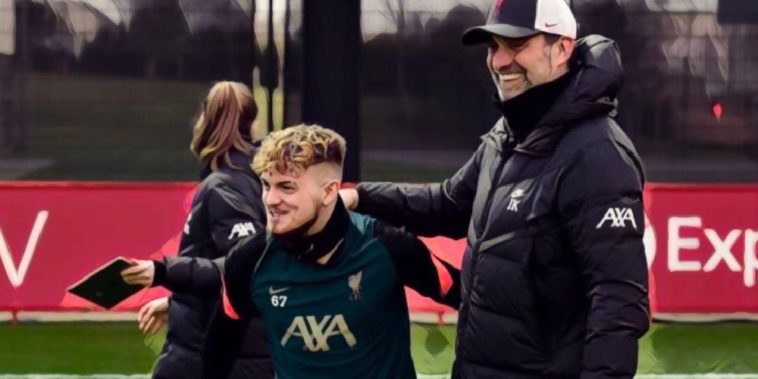 Jurgen Klopp says he is delighted with the return of Harvey Elliott and has praised the development of Diogo Jota, Caoimhin Kelleher and Curtis Jones.

Elliott made his return to full training this week after an extended spell on the sidelines, the teenager having suffered a serious ankle injury during the win at Leeds in September.

The 18-year-old had started three of Liverpool’s first four games of the season with his absence a cruel blow to his development, with Klopp delighted to welcome the ‘outstanding’ midfielder back into his plans.

“It’s outstanding to have him back [in training],” Klopp said at his pre-match press conference ahead of the Reds’ trip to Crystal Palace this weekend.

“I have a really nice office with a really good view so I could watch his rehab sessions and I was already excited by them.

“He’s an outstanding boy. He was out for a long time so we cannot rush it, but he looked directly like he could play!

“I’m pretty sure after the international break he should be ready.”

The 25-year-old has now scored 14 goals in 22 starts in all competitions this season and Klopp has been pleased with the forward’s progress since arriving at Anfield from Wolves in 2020.

“He came here as an outstanding striker. It helps when you have a team that has a bit more possession. If you don’t have the basics no-one can perform miracles. Yesterday he had to do an awful lot to make it happen.

“Diogo is a really impressive person. He has really grown up, he is really mature. He loves football, working and training.

“I’m really happy for him. If you this quality, then it’s really nice that he showed it last night.”

Klopp named Caoimhin Kelleher in his starting side for the win at Arsenal, the club’s second-choice goalkeeper selected despite Alisson featuring in the first leg against the Gunners.

The German has been delighted with the development of the 23-year-old and believes Kelleher is the right place to improve as he bids to earn a long-term future with Liverpool.

“He is the number two at Liverpool and you can’t get much higher than that at his age. We are more than happy with him. He is a John Achterberg [goalkeeping coach] project. There were a lot of steps to take since I arrived.

“He is top class goalie, calm, with belief, good with the ball, and on top of that he makes incredible saves. And what is better for a young goalie than to learn from the best goalie [Alisson] in the world.”

There was also praise for the recent performances of Curtis Jones, who has returned from injury to impress in the wins against Brentford and Arsenal.

Great evening at the Emirates😄
See you at Wembley! pic.twitter.com/Lyz7JSRmZA

Klopp has described the 20-year-old as a ‘massive talent’ and suggested he is keen to ‘push’ for more from the midfielder.

“Look, you win a football game, a difficult one. You can only win it if all the players have performed well and Curtis was really good in the last two games. I have known him for a long time and I’m one of his biggest fans, to be honest.

“I saw him out my office when I first joined and thought ‘Wow, how old is he?’. He was 15 at the time but it was clear he was a massive talent. Talents need to work but he is doing his work and talents need to learn the game. Sometimes he needs a little push and he can have them more often if he likes.”