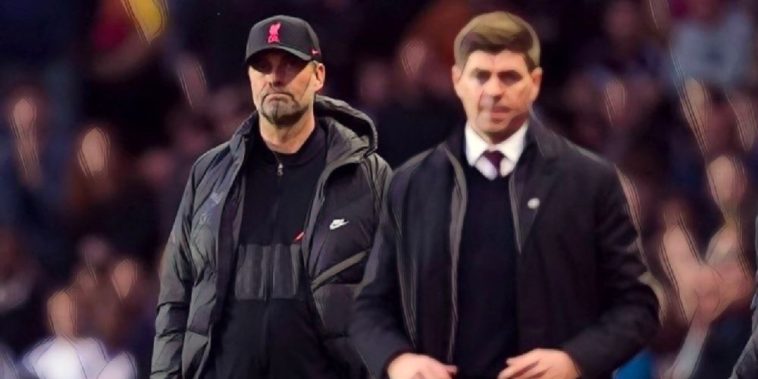 Liverpool manager Jurgen Klopp has backed Steven Gerrard to ‘come back’ from his sacking at Aston Villa.

Gerrard was sacked immediately after Aston Villa’s 3-0 defeat at Fulham on Thursday evening, with the former Liverpool captain sacked after just 11 months in charge at Villa Park.

The defeat continued a difficult start to the season for Villa and the club’s board have lost patience with Gerrard, who lost six of his opening 11 games of the Premier League season.

Gerrard began his coaching career under Klopp’s watch in the academy set-up at Liverpool and the German has backed the 42-year-old to bounce back from the disappointment of his dismissal.

“I am very sure Steven Gerrard will come back from that,” Klopp told his pre-match press conference ahead of Liverpool’s trip to Nottingham Forest.

“We had a little exchange this morning, nothing too deep. I can imagine that it is disappointing for him because of the ambitions he had and the things he wanted to achieve with Aston Villa. It’s obviously not cool, but I don’t think we have to worry now for Stevie. He knows the game and that these things can happen.

“We all get knocks, it is about how you respond. He will come back from that, no doubt. A lot of great managers out there had to leave their previous clubs for different reasons.

“Some of the best turned up elsewhere and tried to learn from it to earn a better situation. So he will be back 100% but now I hope, actually, that he takes a bit of time for him. Since he finished his career he has been working pretty much all the time, so maybe use it a little bit for himself to recharge.”

Klopp provided an update on the fitness of his squad ahead of the trip to the City Ground and confirmed that Naby Keita and Ibrahima Konate are closing in on a return to first-team training.

🗣 "We had a little exchange this morning. I can imagine it's disappointing for him with the ambitions he had."

Jurgen Klopp sends a message to Steven Gerrard after he was sacked by Aston Villa pic.twitter.com/keMSaqfe4Q

Alex Oxlade-Chamberlain also returned to the bench during the win over West Ham in midweek and Klopp admits he ‘can’t wait’ to have the midfielder ‘back properly’.

“From Monday on, Naby [Keita] and Eboue [Ibrahima Konate], if everything goes like planned, will be in full-time training. That means from there we count days, but Naby’s pre-season starts then, more or less, he was really out for a while.

“Ox [Alex Oxlade-Chamberlain] was on the bench in our last game. I don’t think he’s ready to play but was close, so he is one or two weeks ahead of Naby.

“There are a lot of football games to play and I can’t wait to have him back properly.”

He also said that he is waiting to find out if Darwin Nunez will be available after he scored the only goal of the game in the 1-0 win over West Ham.

Klopp is awaiting news on the FA’s disciplinary process, following his red card against Manchester City last weekend. The German admits he is unsure how he will be punished, but expects to take to the touchline at Forest.

“In this moment I expect to be on the bench, but I don’t know 100%. I don’t know too well the [FA disciplinary] process but we have enough people who know how it goes and we did everything we had to do.”