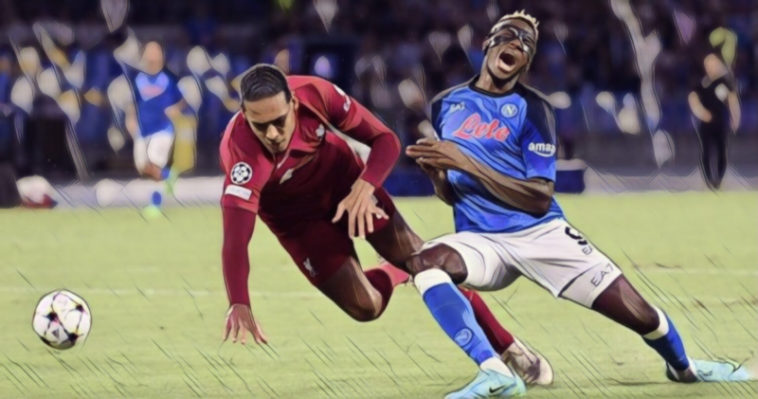 Liverpool’s unconvincing start to the season continued tonight after the Anfield outfit’s opening Champions League group stage game ended in a disastrous 4-1 defeat away at Napoli.

Napoli came into the game unbeaten so far this season and the Serie A started like a house on fire, with the impressive Victor Osimhen rounding Alisson and hitting the post from a wide angle within the first 60 seconds.

The Italian side wouldn’t have to wait long to have another great chance when the referee pointed to the penalty spot after James Milner handled a Piotr Zielinski shot on five minutes. The 28-year-old Polish midfielder was tasked with taking the spot kick with Zielinski stepping up and firing past the Liverpool keeper.

10 minutes later and Napoli would be awarded a second penalty when Van Dijk fouled the effervescent Osimhen. However, Napoli decided to change their penalty taker with Osimhen stepping up and the Nigeria international fired straight at Alisson.

Any hopes Liverpool fans had of working their way back into the game on the back of Osimhen’s miss were soon dashed though and the second goal came from a former Fulham player. Frank Zambo Anguissa picked up the ball on the edge of the area and played a one-two around a statuesque Liverpool defence before firing a low effort past Alisson.

Jurgen Klopp took off the struggling Joe Gomez at half-time but it had little effect with Napoli once again exposing the Reds high line after just two minutes with Zielinski dinking past Alisson after the Brazilian had saved his initial effort.

Liverpool would be handed a lifeline a couple of minutes later though when Luis Diaz curled home from the edge of the area.

Klopp emptied his bench with Thiago, Darwin Nunez, Diogo Jota, and new signing Arthur all entering the fray, but the Reds had left themselves too much of a mountain to climb and the game ended in a humbling 4-1 defeat.

Speaking after the game Liverpool boss Klopp was clearly upset by his sides level of performance.

“Really tough to take, it’s not that difficult to explain when you watched the game. To start with the two penalties, OK first of all Napoli played a really good game, we didn’t, that is the first explanation for the defeat,” Klopp told BT Sport.

“They scored one penalty and missed another but the next two goals we served on a plate and we should defend better. 3-0 down having chances but never really in the game. We were not compact defensively or offensively. Until Thiago entered the pitch I cannot remember one counter-pressing situation, we were too wide.

“Everything is obvious but why it happened, I cannot answer now, let me think about about it. It is a really tough cookie to take, but I have to take it.”