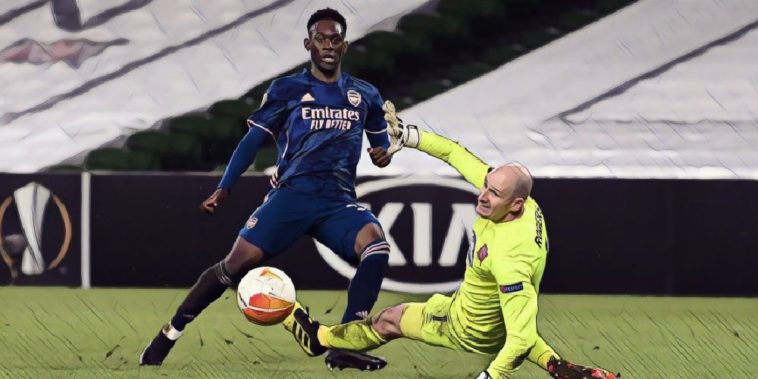 Balogun formed part of a youthful Arsenal side who completed their Europa League group stage campaign with a 4-2 win against Dundalk, maintaining their 100% record in the competition this season with victory against the Irish side.

The 19-year-old came on as a substitute and provided an assist before scoring the Gunners’ fourth goal, with the academy graduate having now provided three goal involvements in just 61 minutes of senior action this season.

Keown was left impressed by the cameo performance of the youngster and the former Arsenal defender has compared Balogun’s movement to the Premier League greats in Cole and Wright.

“I am looking at him and thinking ‘remember the name’ really with the way he looked tonight,” Keown told BT Sport.

“The way he linked up, that is a great turn. You try to compare, is it Andy Cole or Ian Wright? There is that sort of movement about him. I know those are big name players and if he can live up to that he will have some career.

“I just like the way he is always looking on the shoulder and his movement. The way he scores the goal, the way he comes onto it he is pointing, give me it, this is my moment.

“He has had to wait for his opportunity, he is 19 years old and showing really good signs.”

Arsenal will hope to take the momentum from their Europa League campaign into league action when they face Burnley at the Emirates this weekend, the north London side currently 15th in the Premier League after winning just one of their past six fixtures.