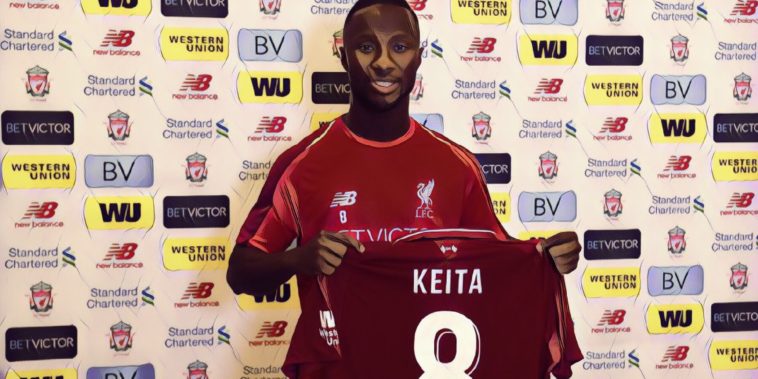 Naby Keita has admitted he wants to emulate the great Steven Gerrard after being handed his famous number 8 shirt.

Keita will finally complete his £48 million transfer from RB Leipzig to Liverpool on July 1 after the Premier League giants agreed to trigger his release clause almost 12 months ago.

While they wanted to bring him to Anfield last summer, the Bundesliga club refused to lose their star midfielder, despite Liverpool thought to be willing to pay up to £80 million.

Keita has already arrived on Merseyside, and now Liverpool have announced that the Guinean will become the first player to wear Steven Gerrard’s famous number 8 shirt since he left for LA Galaxy in 2015.

In fact it was the recently appointed Rangers manager Gerrard who handed him his new shirt number, something which Keita described as ‘incredible’ and hopes to do the shirt number justice:

He told Liverpoolfc.com: “It was an incredible day for me. He gave me the No 8 jersey. When it happened, it was a surprise and I didn’t expect it.

“When he came in, I looked and him and said, ‘wow’ because he is a legend. He is somebody who always showed respect, who gave his all on the pitch, somebody who is loved here.

“If somebody like that gives you his shirt number, it’s not to play around with, it is to try and do as much as he did – that’s my motivation.”

Keita will begin pre-season training on Monday at Melwood when the players not on international duty are due to report to begin preparations for the 2018/19 season.