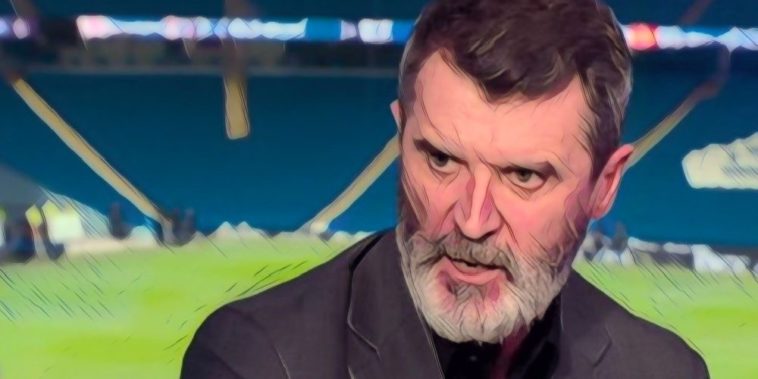 Roy Keane and Gary Neville ripped into Manchester United as they were soundly taken apart by Manchester City in the derby.

Kevin de Bruyne gave the league leaders the lead inside the first five minutes, before Jadon Sancho levelled the scores on 22 minutes as United tried to press Pep Guardiola’s side.

De Bruyne restored his side’s advantage before the half hour mark, before the Belgian turned provider as he teed up Riyad Mahrez with a pinpoint corner as the Algerian stroked past De Gea from the edge of the area.

City’s third seemed to knock the stuffing out of United, who spent the remainder of the game chasing shadows and showing very little intent or determination to get back into the game.

Mahrez scored a deserved fourth in stoppage time as he took advantage of more slack defensive work from the visitors, and speaking after the game, Roy Keane gave a scathing assessment of his former side’s performance and attitude.

“The worst thing that you could say about United is that they gave up,” Keane told Sky Sports. “In any game, if you give up, it’s unforgivable really. The beauty of top-level sport is that there’s no hiding place.

“I know United have done well there in the last few years, but we saw all of United’s shortcomings today. Man City were very good in the second half, but there are ways to lose football matches.

“You’ve got players not putting in performances and players not running back. They stopped running and they gave up. I don’t understand it.

“The manager will be criticised about his tactics, but players not running back when you’re playing for Man Utd is really unacceptable.

“They threw the towel in which is shameful. You need character and personality when you’re up against it and after the third goal, it was game over.”

🗣 "These guys it's all about how am I looking, am I looking the part? Are my boots nice? Hows my hair looking? Just play the game." 🤬

After the third goal, Manchester City had a 15-minute spell in which they enjoyed a whopping 92 percent possession, as United failed to track back and get a foot on the ball in what was an embarrassing display, and Keane said that there are a number of players that should never play for the club again.

“You’ve got to run back and you’ve got to tackle. United players have shown quality over the years but we’ve seen a reflection of where the team is and where the club is,” Keane added.

“They’re so far behind the other teams. You hear noises all the time about things going on in the dressing room with a new manager coming in, but your own bit of pride eventually has to kick in at some stage.

“There were five or six players there who should never play for Manchester United again. It was shameful.

“City are a fantastic team and that’s why they are champions. You hoped the subs who came on would have an impact, but they’re not prepared to run around, couple of lads in midfield, Wan-Bissaka, Fred, Maguire, Rashford, I could go on.

“City didn’t have to be at their best. They still had another couple of gears to go. They toyed with them like they did at Old Trafford.

“It was men vs boys as the old saying goes. They gave up and shame on them.

“United’s history has been built on character and personality when you’re up against it. I feel like I’ve been sat here for two weeks.

“United were never going to get back into it. The white flag came up and the game was over. It was unthinkable.”

Keane’s comments were echoed by that of his former United teammate, Gary Neville.

"Whatever goes on behind the scenes is completely irrelevant to me."

“Manchester United’s response to going 3-1 down has been embarrassing. Ninety-two per cent possession for City? They have given up,” Neville said. “They are walking around the pitch. It’s nowhere near good enough.

“There can be no complaints. City have been absolutely outstanding. But as a Manchester United fan, it’s embarrassing.

“City played brilliantly in the second half. But the effort and intensity from United in the last 20 minutes was non-existent.

“The scoreline isn’t the problem. It’s the response to going 3-1 down that’s the problem. They have thrown the towel in.

“At the end of the game, Manchester United finished like an absolute shower. They were a disgrace in the last 25 minutes.”