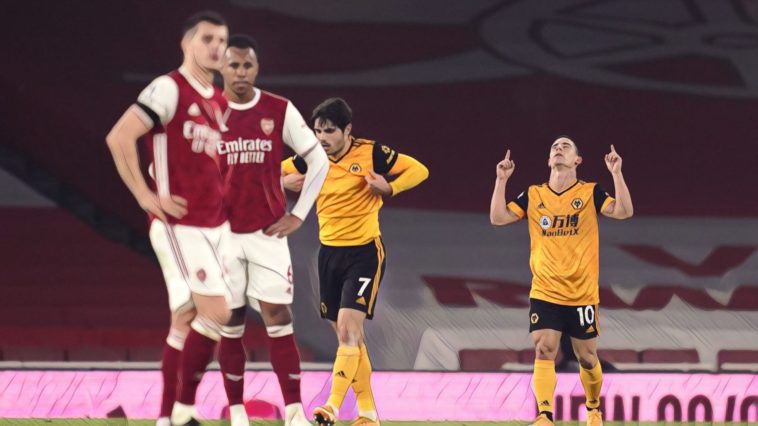 Roy Keane has mocked Arsenal’s dismal start to the season by joking the Gunners are in a relegation battle following their 2-1 loss to Wolves.

Arsenal’s poor performances continued with a fifth league defeat of the season at the Emirates, their third consecutive loss at home and a result which confirmed their start as the club’s worst to a season in the Premier League era.

Mikel Arteta’s side once again toiled in front of goal as Pedro Neto and Daniel Podence secured three points for Wolves, defeat leaving Arsenal 14th in the division with just 13 points from their opening 10 fixtures of the campaign.

The Gunners’ latest loss has increased the pressure on Arteta who has failed to continue the momentum of a promising start to his Arsenal reign, their hopes of challenging for a top four finish and Champions League qualification becoming ever more distant with each passing performance.

Keane was critical of the north Londoners following their defeat to Wolves and has questioned whether the club’s player’s are ‘good enough’, suggesting there is a ‘softness’ to Arsenal following their early season struggles.

“I don’t think the players are good enough. I think there’s a softness there,” Keane told Sky Sports.

“I think their cheerleaders were out when they had a decent performance against United. They’ve had one point since then, lost the other two games.

“I think they look soft. Probably lacking a bit of confidence.

“You can have an off night, but you still find a way to get that result, and at this moment in time, I don’t see it with this group of players.

“I think they look a bit soft.”

Arsenal next face Rapid Vienna in the Europa League on Thursday night before a crucial clash against north London rivals and league leaders Tottenham next weekend.

Keane – whose Manchester United side enjoyed some classic battles with Arsenal during his playing career – admits a derby fixture could be the ‘best game’ to turn around their fortunes, though couldn’t resist one last dig at his former foes.

“They all seem big at the moment, don’t they?

“Maybe that might be the best game for them to have next… it’s a derby and it’s away, so less pressure than at home.