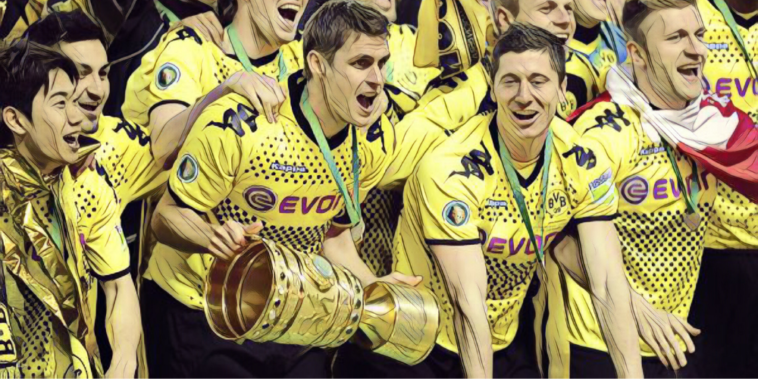 Borussia Dortmund enjoyed a golden period in their history during the Jurgen Klopp era, winning back-to-back Bundesliga titles and a first ever domestic double.

Dortmund played some scintillating football during a record-breaking 2011/12 campaign, becoming just the fourth club since the Bundesliga’s formation to win a domestic double and setting a new records points tally to be crowned as champions for a second successive season.

Klopp’s side were far and away the nation’s best and showcased their dominance with a ruthless cup final performance, dismantling Bavarian behemoths Bayern Munich 5-2 at the Olympiastadion in Berlin.

Robert Lewandowski was the star in what proved a breakthrough season for the prolific Poland international, scoring a stunning hat-trick against his future employers in a brilliant individual performance.

Earlier goals from Shinji Kagawa and Mats Hummels had put BVB in control of the final, as Bayern were embarrassed in an attacking performance that lives long in the memory of the Westfalenstadion support.

Here is Borussia Dortmund’s 5-2 thrashing of Bayern Munich in the 2012 DFB-Pokal final.