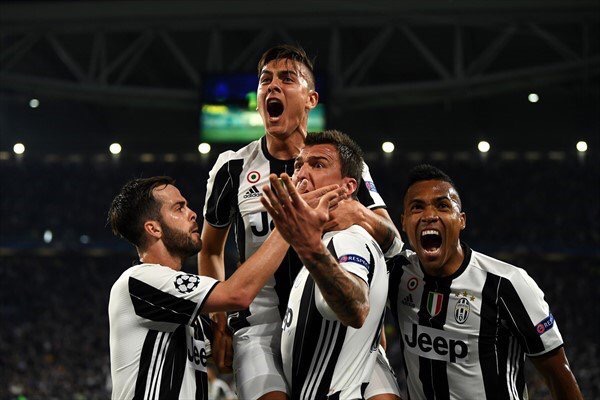 Juventus started the game at break neck pace, pressing Barcelona into some mistakes. Barcelona persisted with their infamous passing out from the back but were nearly caught out on a number of occasions.

The breakthrough came for Juventus after a nice bit of build up play found Cuadrado on the right wing. The dynamic Columbian cut the ball into the box for Dybala, who quickly spun and curled the ball home in the far post.

After the goal Juventus started to sit back more as their relentless pressing was perhaps unsustainable. This lead to some Barcelona chances including a great opening for Iniesta. Lionel Messi picked the ball up deep and threading an impressive ball through the Juventus midfield and defence putting Iniesta clean through. However Iniesta’s low shot was excellently put wide by Gianluigi Buffon in the Juventus goal.

Juventus were spurred on by their goalkeeper’s heroics and began to threaten on the counter attack.

Dybala at the Double

Their second goal came in true counter attacking style as Mandzukic was played through by a long ball on the left. He ran some distance down the wing before cutting a ball back for Dybala who swept it home in style. Barcelona’s defence was poorly organised, leaving the deadly young Argentine in acres of space on the edge of the box.

Juventus finished the half in an organised fashion, making sure Barcelona couldn’t get that crucial away goal.

The second half got underway with a change in Barcelona’s shape, swapping Mathieu for Andre Gomes and switching to a back 3. However this didn’t change Barcelona’s fortune much as 10 minutes into the second half they conceded a third.

Juventus whipped in a dangerous corner which was headed home strongly by Chiellini. Mascherano appeared too busy grappling him to actually try and win the ball and the Juventus and Italy stalwart took full advantage.

For the rest of the second half Juventus maintained their rigid 442 shape to make sure Barcelona couldn’t crack them open.

A special mention must go to Mario Mandzukic at left midfield, who put in an incredible defensive shift all evening and contributed well to Juventus attacks.

All in all Barcelona appeared vulnerable defensively and clueless in attack up against a competent defensive unit. This game was almost a carbon copy of the previous round’s first leg tie against PSG.

Time will tell next week to see if Barcelona will pull off a similar miraculous turnaround at the Nou Camp.