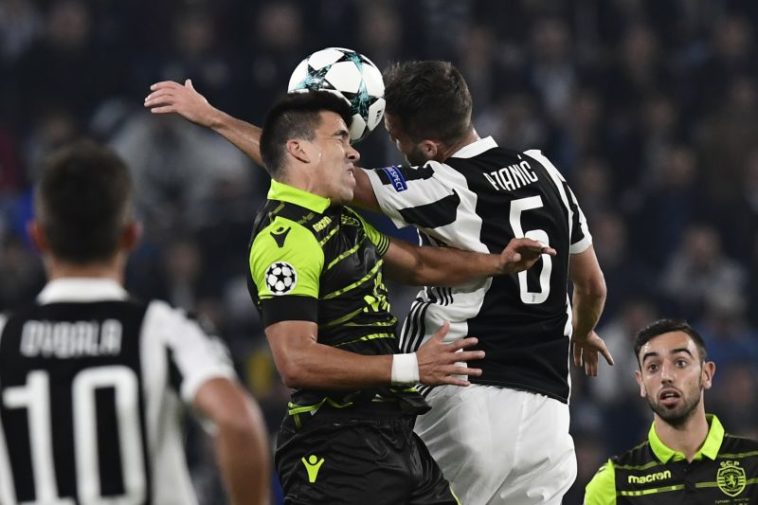 The Lions travelled to Turin to face the Italian giants in a decisive Champions League match that would send one of them closer to the elite round of 16.

With both teams having the same number of points in their respective group table, both needed a win to climb up into a qualifying spot. Juventus were under more pressure though, as not only were they considered the favourites, but the recent surprise home loss against Lazio had a very negative effect on the players.

The match started and was evenly played between the two sets of players during the first 10 minutes.

The first shot on goal arrived in the 12th minute of the game targeted at Juventus. Fortunately for Sporting, it resulted in the inaugural goal. A brilliant pass by Bruno Fernandes saw Gelson Martins receive it right outside the box, facing only the keeper. The Portuguese tried the shot, but Buffon saved it at close range. Unluckily for the Italians, the ball then rebounded on Alex Sandro’s leg and bounced backwards into the goal.

A few minutes later, Juventus responded with their first shot on target. After a good cross into the area, the Sporting defence were quick to send the ball out, but straight to Khedira’s feet. He struck it low and hard, and it would have crept into the bottom left corner if it weren’t for Rui Patricio’s cat-like save.

From then on, the home team started to take control of the game.

Close to the 30th minute, a free-kick was awarded against Sporting, right on the edge of the box. Dybala and Pjanic both stepped up to take the shot, but it was the latter who produced a phenomenal strike that saw Patricio stay rooted to the spot while the ball charged into the top left corner.

Nothing much happened until the last few minutes.

In a quick attack by Juve, Chiellini whipped it into the box from far away. Khedira leapt forward and met the ball with his head, but aimed it to the right side of the goal posts. Just before it left the pitch, it seemed as if Cuadrado would tap it in but the winger was a second too late.

With a free-kick awarded far from the penalty area, Sporting showed off a clearly studied set piece. Bruno Fernandes started it off with a strong pass towards Acunã who managed to cross the ball just before it went out for a goal-kick, but it all broke down in the end with Coates’ misguided header.

For the last play of the first half, Juventus were awarded a corner. The ball was crossed towards the attacking mass, with Chiellini receiving it before chest-passing it to Higuaín. The Argentinian delivered a great close-range shot, but Patricio once again showed off his brilliant goalkeeping ability, saving Sporting in the process.

The first 45 minutes ended with the score remaining 1-1.

The second half saw Sporting become more active in their attacking third, although the Italians continued to stay on top of the game.

After a few feeble attempts from both sides, Juventus were close to scoring in the 63rd minute.

In a quick forward movement, the home team made a number of passes before delivering it to Higuain in the penalty area. The player, blocked by the opposing defender, managed to keep control of the ball before lobbing it towards Mandzukic. It looked as if he’d reach it and score the goal, but Piccini launched towards the ball, heading it out of harm’s way.

They got another dangerous shot on target later on from a corner kick, but the resulting header was weak and easy for the keeper’s hands.

Coming into the final 15 minutes of the match, Alex Sandro attempted a cross to try and find another goal. The ball deflected off Bruno Fernandes though and nearly betrayed Rui Patricio as he just got a hand to it before it could make its way into the top left corner.

It was only in the 84th minute that the winning goal finally appeared.

With Juventus pressuring the opposing defence once more, they produced a good attacking play that ended with a pass to Douglas Costa on the left wing. The Brazilian dribbled past Bruno Fernandes before providing an excellent cross towards the center of the penalty area. Mandzukic battled his way past the defenders to head the ball home and La Vecchia Signora were in the lead.

In a last desperate attempt, well into stoppage time, Sporting searched for a goal to bring them level. Bruno Fernandes sped along the right wing, dribbled past Alex Sandro, and proceeded to cross the ball trivela-style, (with the outside of the foot), towards Doumbia. The recently subbed-on striker launched himself forward but, miraculously for Juve, he missed the ball by a whisker, failing what would have been a certain last-minute goal.

The referee blew the whistle, ending the match 2-1.

Juventus celebrated their difficult home win, while Sporting walked away with the strong feeling that they deserved at least one point.

With this result and Barcelona´s consequent victory over Olympiakos, Juventus now find themselves in 2nd place and hold a three-point lead over Sporting. The Portuguese club is therefore still in 3rd place with three points, while Olympiakos trail behind without a single point, and Barcelona lead with nine.