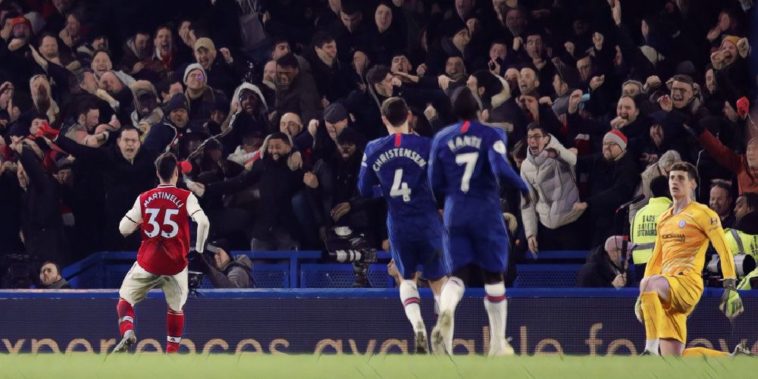 Jorginho has blamed a lack of ‘concentration’ after the Chelsea allowed 10-man Arsenal to rescue a 2-2 draw with a late equaliser at Stamford Bridge.

Frank Lampard’s side had been in total control after taking the lead through Jorginho’s first-half penalty, with former Blues defender David Luiz sent off for the visitors after clumsily hauling down Tammy Abraham in the area.

Chelsea continued to press with their man advantage but struggled to extend their lead, before N’Golo Kante’s unfortunate slip allowed Gabriel Martinelli to race clear and equalise for Mikel Arteta’s visitors.

Despite that setback, the hosts pushed forward once more and took the lead for a second time late on courtesy of captain Cesar Azplicueta’s close-range strike, only to surrender their lead once again in what was a dramatic finish as Hector Bellerin rescued a point for Arsenal with just three minutes remaining.

Jorginho admits the club’s late collapse was difficult to accept, blaming a lack of concentration for his side’s failings as the west London side extended their recent run to just one win in four Premier League matches.

“We feel like we lost the game,” the midfielder told BT Sport. “We had the game in our hands then in the last second conceded a goal when we shouldn’t. It’s hard. We need to move forward.

“I don’t think it’s confidence because we played well and were controlling the game. Something about concentration maybe. In these kind of games, you lose in moments. We made mistakes. That is it.

“These big games are like these. You can win and lose the game in the details.”