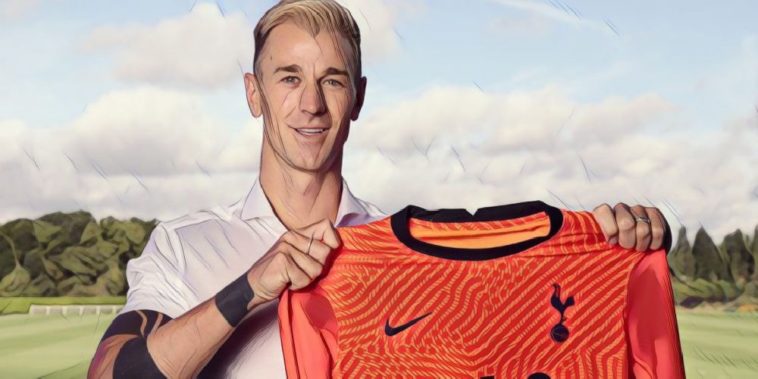 Joe Hart has revealed his excitement after completing a free transfer move to Tottenham and says he is ready to ‘push’ Hugo Lloris for a first-team place.

Hart arrives in north London on a two-year deal following the expiry of his contract at Burnley, with the former England international set to boost Spurs‘ goalkeeping options following the departure of Michel Vorm, as well as helping the club fulfil its homegrown player quota.

The 33-year-old has suffered a stark downturn in his career since being forced out of Manchester City following the arrival of Pep Guardiola, the experienced star having endured disappointing fortunes during spells at Torino, West Ham and Burnley.

Hart, however, admits he is relishing the prospect of a new start and working alongside Jose Mourinho and Spurs’ goalkeeping options as he bids to reignite his career this season, admitting he is ‘excited’ by the challenge ahead and the prospect of playing European football at the Tottenham Hotspur Stadium.

“Firstly, I just want to say thank you to the Club for seeing something in me,” Hart told SpursTV. “I’m here to help the team any way I can, be it on the field, off the field, I’m here to push the club forward.”

“There’s no getting away from it, it’s been a difficult couple of years for me personally on the football field, but I feel like I’ve got so much to give, got a lot of quality, and I’ve obviously got a lot [of experience] in the bank.

“I’ve got a huge admiration for Hugo [Lloris], one of the worlds greatest goalkeepers, and I’m genuinely excited to work with him, excited to push him and excited to learn from him.

“I can only look at things positively. I feel like I’m starting again, and I quite enjoy that feeling, and my body is certainly ready to start again. I’ve worked hard, tried to grow as a person and a player. I’m ready to push, ready to get back to the levels. I love the idea of European football. I love the two games a week…it all excites me.

“You can’t help but get excited by this club. A tremendous training ground, one of the worlds greatest stadiums, some of the best players that you can get in football, and one of the worlds best coaches who has done huge things in the game. I’ve always had a good relationship when playing against him, we always find a way to come together and discuss the game, and I think we can really work together well as a team and as a unit.