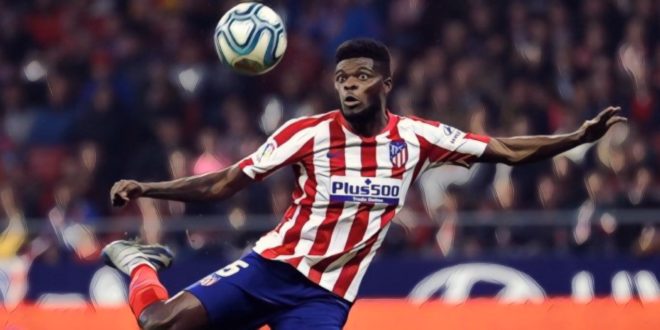 Thomas Partey has become a name regularly linked with Europe’s elite of late following his starring performances at the heart of the Atletico Madrid midfield, a reasonable release clause in the Ghanaian’s contract attracting attention from the continent.

Partey has evolved into a complete midfield talent since signing for Atleti as a teenager, an all-action powerhouse of a player who would add versatility and box-to-box brilliance to any side capable of tempting him away from the Spanish capital this summer.

So for those of you interested in online sports betting, here are the bookmaker’s five favourites to sign Atletico Madrid midfielder Thomas Partey:

Fernandinho’s advancing years and David Silva’s departure after a decade at the Etihad means there will soon be space in the engine room at Manchester City, with Pep Guardiola currently rebuilding his squad following a disappointing season.

A distant second to Liverpool in the title race and yet another meek Champions League exit at the hands of Lyon has raised the need for new additions, which could lead to a summer move for Partey.

Guardiola raided Atleti for the signing of Rodri – largely viewed as the long-term successor to Fernandinho – last summer, and the club are 25/1 outsiders to return to the Wanda Metropolitano in the current transfer window for Partey.

Partey’s elite athleticism and versatility make him ideally suited to the demands of the Premier League, though a move to the blue half of Manchester appears unlikely at present, City’s focus believed to be on the signing of an additional central defender and left-back following the already announced arrivals of Nathan Ake and Ferran Torres this summer.

Across the other side of the city and Manchester United are another side looking to invest, Ole Gunnar Solskjaer keen to build on a season that saw the Red Devils return to the Champions League and reach three semi-finals.

United are currently well stocked in central midfield with the attacking talents of Paul Pogba and Bruno Fernandes complimented by Fred, Scott McTominay and Nemanja Matic, the latter having returned to favour this season to provide a defensive screen at the base of the midfield.

Matic was rewarded for his performances with a contract extension but at 32 he lacks mobility and the arrival of Partey would prove an upgrade in defensive midfield, a player at the peak of his powers and capable of covering the gaps left by the marauding Pogba and Fernandes.

United’s focus appears to be on a protracted pursuit of Borussia Dortmund winger Jadon Sancho, however, and the long-running saga could lead to the club missing out on targets in other key areas.

Paris Saint-Germain are believed to have kept a watchful eye on Partey’s situation in recent months, the French champions keen to bolster their midfield with a tireless and physical presence.

Partey fits the bill and his release clause at Atletico – believed to be in the region of £42m – makes him an attainable target for a club who have proven no strangers to splashing out on top talent in recent seasons.

PSG have once again dominated French football and secured a domestic treble this season, whilst the club have also shown progress in Europe by reaching the semi-finals of the Champions League for the first time since the mid nineties.

Despite those achievements, however, Thomas Tuchel is keen for fresh additions with notable names such as Edinson Cavani, Thiago Silva and Thomas Meunier already confirmed departures.

PSG are believed to be long-term admirers of Lazio star Sergej Milinkovic-Savic, but could turn their attentions to Partey with the former having indicated his desire to stay in Italy following the Rome outfit’s qualification for the Champions League.

Reportedly arriving late to the ‘Partey’ and second favourites for his signature are Juventus, who are seeking an overhaul of their ageing squad following the arrival of Andrea Pirlo as manager in Turin.

Juventus have dominated Italian football over the past decade and secured their ninth Serie A title in succession this season, but a hugely disappointing Champions League exit to Lyon means their wait for European success – now stretching 25 years – will continue into another season at least.

The Bianconeri’s overhaul has already begun with Arthur arriving from Barcelona in a deal that will see Miralem Pjanic head in the opposite direction, whilst experienced midfielder Blaise Matuidi has also departed to join MLS side Inter Miami.

Aaron Ramsey’s future also remains unclear at present, and Pirlo is said to be keen on strengthening his midfield options with the capture of Partey – speculation suggesting Juventus are prepared to include players in exchange in a bid to get the deal done.

The odds-on favourites to secure the signing of Partey are Arsenal, with Mikel Arteta having made the midfielder a priority target following his arrival at the Emirates in December.

Arteta’s opening months in charge of the Gunners have shown the club make signs of progress, whilst their FA Cup triumph secured European qualification despite their lowest league finish in 25 years.

The Spaniard has swiftly identified the need to bolster the spine of his side and Partey looks the ideal candidate to add dynamism and work-rate to an often powder puff midfield, the Ghana international a player capable of protecting a vulnerable backline with his ball-winning abilities.

The north London side are lacking resources following the financial impact of the coronavirus pandemic with the club having controversially announced 55 staff redundancies in a bid to cut costs, with Arteta hoping to raise funds by selling a growing collection of deadwood currently amongst the Gunners’ ranks.