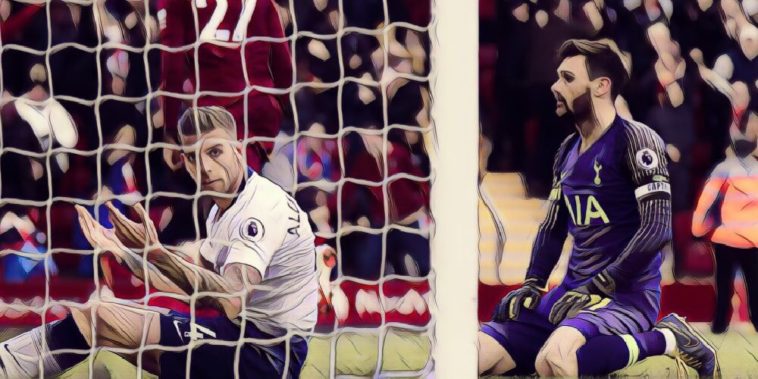 Roberto Firmino put Liverpool ahead in the first half, latching onto a delicious Andy Robertson cross, before Lucas Moura hauled Spurs level with 20 minutes to play.

Spurs would have two very good chances to win it late on, with both Mousa Sissoko and Dele Alli putting their efforts over the bar, only to see Jurgen Klopp’s men snatch all three points at the death when Hugo Lloris parried what looked to be a comfortable save straight into the path of Toby Alderweireld, who couldn’t prevent the ball trickling over the line.

Analysing Lloris’ error on Match of the Day 2 – who pointed out that the Frenchman has the second highest number of errors in the Premier League which have led to goals (8) since 2016 – former Tottenham midfielder Jermaine Jenas called for Pochettino to drop the Spurs number 1, calling his error ‘a shocker’.

“That’s a shocker from Hugo Lloris – a World Cup winner, a so-called world-class goalkeeper, that’s just not acceptable, in a moment when Spurs are chasing top four, they need better from their captain.

“I think Mauricio Pochettino has a decision to make now. For every last-minute penalty save, you get a Chelsea Kieran Trippier backpass incident, for every first half against Dortmund away, you get that [today].

“Every time I watch [Paulo] Gazzaniga play, he’s playing very well. If you’re Gazzaniga now, you’re going ‘it’s time for me to get my opportunity’ and I think he should do.

“He’s had a difficult couple of seasons, he’s 32 years of age, he was there when I was at the club, he’s a World Cup winner, he should be at the peak of his powers right now, if anything he looks more nervous than he did when he turned up at the club!

“We go through it as players, but a decision now has to be made to ensure the mini-league that he [Pochettino] talked about, that they get over the line.”