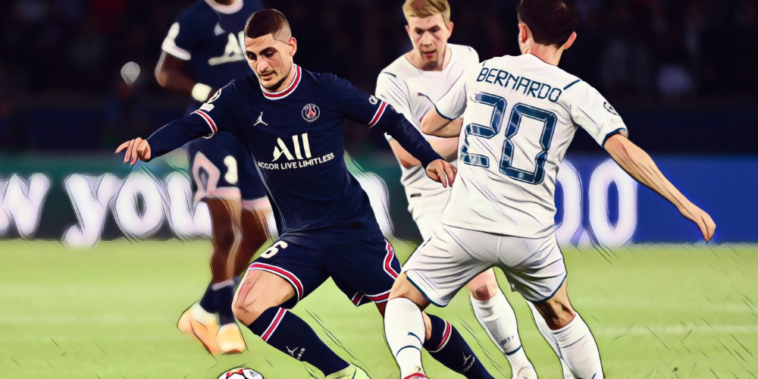 Lionel Messi scored his first goal as PSG secured victory in a gripping group stage game at the Parc des Princes, with the Argentina captain firing home a superb second-half effort after Idrissa Gueye had opened the scoring after just eight minutes.

City created several opportunities but were unable to find a way through the Parisian resistance, though it was the performance of midfielder Verratti that had Guardiola eulogising post match.

The Spaniard proclaimed his ‘love’ for the Italy international following a brilliant performance from Verratti, who orchestrated his side throughout in a crucial win for Mauricio Pochettino’s side.

“I’m in love with him. He is exceptional,” Guardiola said. “Even under pressure, he manages to find those passes that allow the midfield to be free.

“He’s not a player for long passes but you can always count on him to build the game. We managed to control him better in the second half but in the first half he was really exceptional.”

Guardiola discussed the difficulty in containing PSG’s superstar forward line, with Mbappe and Messi combining brilliantly for the latter’s first goal in the club’s colours.

The City boss admits it is ‘hard to control’ Messi for the entire 90 minutes, having seen the six-time Ballon d’Or winner seal three points for PSG in Paris.

“They can take the space,” Guardiola said. “They are exceptional players, like Messi-Suarez-Neymar at Barca. Not many teams can have these players. PSG has them. We can’t control them. I know two solutions: defend and pray or take the ball and create with it.

“It’s hard to control Messi for 90 minutes. It’s hard to stop him and we had to minimize the opportunities for him to touch the ball. Tonight we did what we know how to do, good or bad, but we are what we are. Tonight there was also Verratti who was extraordinary and managed to find connections with Neymar.”