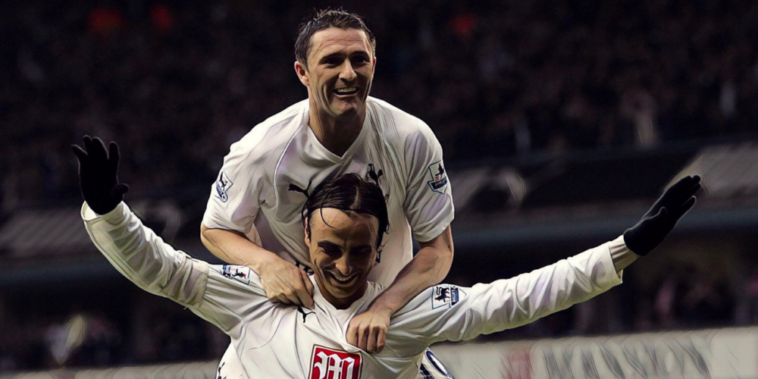 Tottenham fans idolise match-winning mavericks. From Paul Gascogine’s gifted genius to the fleet-footed flamboyance of David Ginola, there have been some truly fantastic footballers strut their stuff at White Hart Lane.

Dimitar Berbatov‘s arrival in North London was another deal that created excitement, having formed part of a Bayer Leverkusen team that captured the imagination of Europe before crossing to the Premier League with a rising reputation.

Berbatov’s nonchalant brilliance made him an instant fans’ favourite in the capital and his arrival began a potent partnership at Spurs, the enigmatic and often effortless Bulgarian proving the perfect compliment to a chirpy cartwheeler from across the Irish Sea.

For two seasons at Spurs, Berbatov and Robbie Keane were a cocktail of great goals and lovely link-up play, a pairing whose talents teamed up and made a long-suffering support dare to dream.

Keane was first to arrive at Tottenham after signing from Leeds in 2002, a rapid rise having see the Dubliner pass through Coventry, Wolves and Milan before joining the Elland Road exodus caused by Leeds’ financial meltdown.

He had reached double figures for league goals in four straight seasons at Spurs and formed several understandings, notably with Mido as Spurs narrowly missed out on Champions League football in 2005/06.

Berbatov’s arrival was viewed as a signing to take Spurs into the top four, a classy customer who had reached the Champions League final with Leverkusen.

His 21 league goals trailed only Miroslav Klose in the Bundesliga the previous season, but both Berbatov and Keane began the 2006/07 season slowly as Jermain Defoe led the line.

Berbatov scored on his home debut against Sheffield United but took time to find his feet, though a UEFA Cup win against Club Brugge provided a preview of a classy collaboration.

Berbatov scored twice in a 3-1 win over the Belgians, opening the scoring with a stunning volley before heading home a third. In between he had teed up Keane with a delicate flick, and the seeds of their partnership had been sown.

“I got him straight away and our understanding on the pitch was incredible,” Keane told UCFB.

“I always knew where he was and vice-versa; we had this understanding where if I went long he went short and it was very difficult for defences to play against us. We had a real connection from the very start.”

Soon the dovetailing duo became first-choice and proved a perfect compliment for each other’s gifts. Berbatov’s languid manner shone even in the hustle and bustle of England’s top tier, with his guile the perfect accompaniment to the Keane’s energetic enthusiasm.

Each were comfortable dropping deep or stretching defences, their ability to interchange – alongside a selflessness – providing a recipe to trouble Premier League defences.

Berbatov was unconventional and possessed a first touch that absorbed the ball like a sponge with water, an extravagant enigma that Keane connected with both on and off the pitch.

“The best partnerships work when there’s no selfishness between you, you don’t care whether you score or he scores. If Berba was standing there for a tap in I’d play it to him and he’d do the same, that’s why it worked.”

There first season together delivered 45 goals in all competitions combined, including all four in a 4-0 FA Cup thrashing of Fulham in February. In April, the two shared the Premier League’s Player of the Month award, a nod to their creative chemistry and the first time two teammates had co-won the accolade.

That month saw Keane score six goals and Berbatov net two of his own, the front two scoring eight of Spurs’ nine goals in the Premier League that month, including all three in a 3-2 win at Middlesbrough.

On a previous visit to the Riverside… 🔥

Berbatov and Keane also starred in Europe as Spurs reached the UEFA Cup quarter-finals, scoring 13 goals during the North London side’s run to the last eight.

Berbatov summed up in two finishes 🥰

The following season saw another 46 goals scored and ended with major silverware. Success in the League Cup brought Spurs their first trophy since the turn of the millennium and one that remains their most recent honour.

Each were invaluable to the club’s cup success, with Keane scoring in the 5-1 semi-final thrashing of Arsenal and Berbatov netting an ice-cool penalty in the final win over Chelsea.

Both were also on the scoresheet as Spurs shared the spoils with Chelsea in a Premier League classic, a chaotic 4-4 draw between the London rivals at White Hart Lane.

Berbatov brought Spurs back into the contest after rising above John Terry to head home, before Keane secured a point in dramatic fashion with a bending finish from outside the area.

That Robbie Keane equaliser 👏@SpursOfficial played out an entertaining draw with @ChelseaFC, #OnThisDay in 2008 📆 pic.twitter.com/wA6eeHVczU

“Robbie was so passionate, always running, while I ran in my head, trying to anticipate the moves and see where the ball was going to go before it went there,” Berbatov said to ESPN on Keane.

“That’s what good players do. We complimented each other very well and scored so many beautiful goals.”

Despite the goals of the Keane-Berbatov partnership, Spurs were unable to reach the promised land of the Champions League. After a fifth-place finish in their debut season together, Spurs slipped to 11th in 2007/08 and it was a season that ended with each leaving in search of a new challenge.

Keane signed for Liverpool in a £19m deal that summer but endured an unhappy time at Anfield, spending just six months with the Reds before returning to Spurs in a discounted deal.

Berbatov departed in the same window and joined Manchester United in a £30.75m deal, winning two league titles, the Champions League and a Premier League Golden Boot at Old Trafford.

Their recollections of their time in tandem paints the picture of a partnership that thrived at Tottenham, a merging of two intelligent forwards who shone both as individuals and a collective.

In total ‘Keano’ and ‘Berba’ accounted for 91 combined goals in all competitions in 2006/07 and 2007/08, a fruitful understanding between two players who ended their international careers as the record scorers of their respective nations.

The unison of Teddy Sheringham and Jurgen Klinsmann and the deadly double-act of Harry Kane and Son Heung-Min are among the fine partnerships Spurs have enjoyed during the Premier League era.

Evocative memories of fondness will always surface when the conversation turns to Keane and Berbatov, however, a short but sweet spell of footballing fun at White Hart Lane.