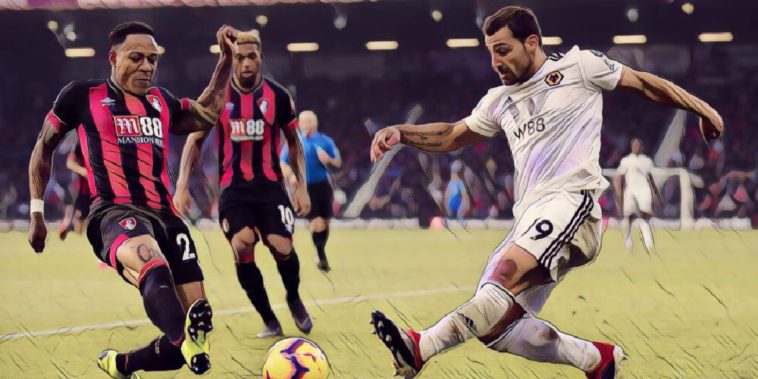 In a game whose narrative was dominated by three penalties, Eddie Howe said he was left disappointed by Bournemouth’s 1-1 draw with Wolves.

In a game short on quality, it was referee Roger East who took centre-stage at the Vitality today, pointing to the spot on three occasions, with two being converted and one being sent wide of the post to see the spoils shared.

Joshua King opened the scoring from the spot in the 14th minute before Wolves’ Raul Jimenez pulled the scores level with just seven minutes to play after in-form wing back Matt Doherty had been brought down in the box.

Two minutes later, however, King had the chance to restore the Cherries lead, but he put the third penalty kick of the game agonisingly wide.

Speaking after the feisty encounter, Bournemouth boss Eddie Howe said that he was disappointed with the result, while questioning the validity of two of the penalties.

“It was a tight game, not very fluent from us today. We feel disappointed not to have won,” Howe told the BBC.

“My initial reaction to the first one was that it was a penalty. You’re always slightly biased, but I thought theirs was harsh on us. The player got his shot away and you don’t see players penalised for the follow-through in that scenario very often.

“The third one, there is a debate over whether it is inside the box. I haven’t seen it again. We should score and win, Joshua King has been a reliable taker for us but it wasn’t to be.

“Mentally we were good. Wolves played their way and they do it well. We were dogged, it’s just a shame that we couldn’t get the win we wanted.”