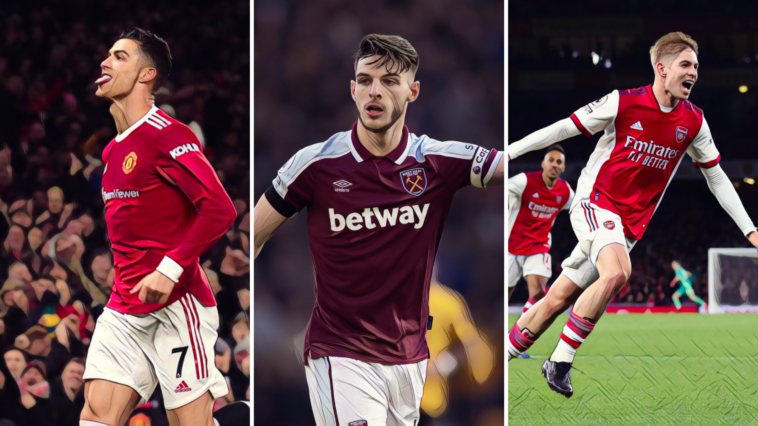 Champions League football provides opportunities and lucrative finances for Premier League clubs, with each of the division’s leading sides striving to join Europe’s elite next season.

Manchester City, Liverpool and Chelsea are currently embroiled in a tight title race at the top, each of those three almost certain to finish the season inside the top four and secure Champions League qualification.

Behind that table-topping trio, however, there is a collection of clubs evenly matched and seeking the fourth and final spot, with just six points separating the sides currently fourth and eighth in the Premier League table.

So for those of you interested in the best list of betting sites, we’ve decided to see how the bookmakers assess the race for a top-four finish.

Ground to make up is the overriding narrative of Leicester’s top-four challenge, the Foxes currently someway adrift of the Champions League places following an indifferent start to the campaign.

Brendan Rodgers’ side incredibly spent 567 days in the Premier League’s top four over the past two seasons – more than any other team – but failed to secure Champions League football in either campaign after costly final-day defeats to Manchester United and Tottenham respectively.

Having strengthened the squad during the summer, expectations were that the Foxes would mount another challenge for the Champions League, but the FA Cup holders have won just five of their opening 15 fixtures to languish 11th, eight points adrift of the top four.

Their 33/1 odds are reflective of that start and the mounting gap, with the absences of Wesley Fofana and James Justin having been noticeable in a side lacking defensive solidity.

Leicester have kept just one clean sheet this season – on the opening day against Wolves – and it is a statistic that must change if Rodgers’ side are to have any chance of closing the gap to the sides above them.

Arsenal’s disastrous start to the season raised huge doubts over their top-four credentials, but Mikel Arteta’s side have since regrouped to sit seventh and within touching distance of the Champions League places.

Arteta’s faith in youth has seen the likes of Bukayo Saka and Emile Smith Rowe emerge as key players, but the Gunners will need their more experienced stars to step-up if the club are to end a five-season absence from Europe’s elite.

Arsenal’s lack of continental football this season could boost their chances of a top-four finish, allowing Arteta to keep his core fresh as rival sides juggle commitments across the second half of the campaign.

Three defeats in four fixtures have halted the momentum of an eight-game unbeaten run, however, whilst the north Londoners will also need to improve their record against direct competitors at the top end of the division.

So far this season the Gunners have developed a reputation as flat-track bullies, with clashes against Chelsea, Manchester City, Liverpool and Manchester United all ending in defeat.

David Moyes has ensured West Ham continue to perform above all expectations, building on last season’s sixth-place finish with another strong start to the campaign.

There were pre-season doubts over whether West Ham could replicate last season’s achievements as the Hammers dealt with a combination of Premier League football and European commitments, but Moyes’ side have progressed through the Europa League in fine fashion and sit fourth in the division at present.

Recent victories over Liverpool and Chelsea have shown the difficulties in securing a result at the London Stadium, with West Ham’s set-piece prowess having become one of the division’s most potent weapons.

Squad depth is perhaps the major concern regarding West Ham’s challenge, particularly the lack of specialised cover for Michail Antonio at centre-forward.

The east London side have so far shown a capability to contribute across the pitch, however, with Pablo Fornals, Said Benrahma and Jarrod Bowen all providing a more than capable supporting cast.

Three successive wins have lifted Antonio Conte’s side to fifth in the Premier League, two points behind West Ham in fourth as the Italian’s reign begins to take shape.

Spurs have struggled for consistency this season, but a favourable run of recent fixtures has allowed Conte time to slowly implement his ideas whilst still producing results.

The challenge now will be replicating those results against improved opposition, ahead of a difficult run that sees Spurs travel to face both Brighton and Leicester before a home clash with Liverpool before Christmas.

Harry Kane’s form also remains a concern for the north Londoners, with last season’s Golden Boot winner having scored just once in 13 league appearances so far this season.

That Spurs remain in the race despite their talisman’s toils is perhaps a positive, however, and Conte’s side can challenge for the Champions League places if Kane can rediscover his finest form.

Outside of the division’s top three, Manchester United are the 6/4 favourites to secure a top-four finish as a new era under Ralf Rangnick begins at Old Trafford.

The signings of Cristiano Ronaldo, Raphael Varane and Jadon Sancho raised cautious optimism  over a title challenge, but a poor run of results has since led to the sacking of Ole Gunnar Solskjaer and a tempering of expectations.

United, however, remain in a strong position to secure Champions League football and boast the most talented squad amongst their nearest rivals, with the task for Rangnick now to implement his style and get the Red Devils’ finest footballers firing.

That’s the most they’ve done so in a Premier League match since Sir Alex Ferguson retired.

What an impact Ralf Rangnick has made already! 📈 pic.twitter.com/z1rigMRwnb

Ronaldo’s performances will be crucial to their chances with the Portugal international remaining an elite goalscorer, having scored 12 times from 15 starts across all competitions since his return to English football.

With Sancho finding his feet and Marcus Rashford recovering from his injury issues, the Red Devils possess the firepower to edge their challengers for a top-four finish.

Rangnick’s reign will also begin with a favourable run of fixtures across the festive period, with the club facing just two current top 10 teams – Brighton (9th) and Wolves (8th) – across their next seven games.