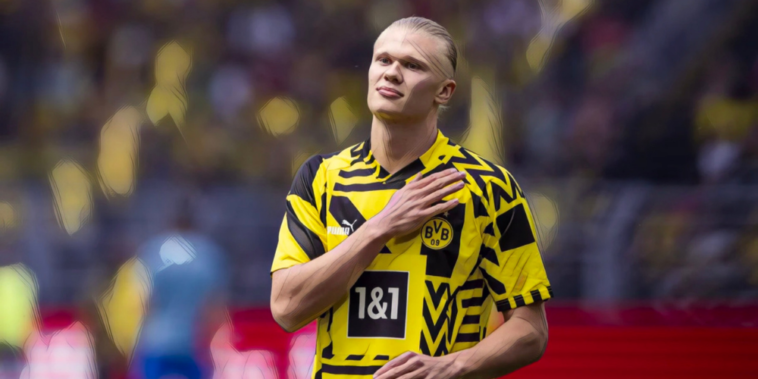 Erling Haaland will be a Premier League player next season, after Manchester City won the race to secure the signing of one of world football’s most exciting talents.

Haaland has emerged as one of Europe’s finest forwards in recent seasons and has enjoyed a prolific record since signing for Borussia Dortmund in January 2020, averaging almost a goal-per-game across his two-and-a-half seasons at the Westfalenstadion.

The Norway international is already one of the game’s most feared forwards at just 21 and will now be tasked with leading the line for Pep Guardiola’s side at the Etihad.

Ahead of his summer move to the Premier League, we’ve looked at how Haaland compares to the best forwards in Europe’s top five leagues.

Here are the five players with the most goals across all competitions since Haaland’s debut for Dortmund.

Cristiano Ronaldo continues to match the best forwards in Europe for goals, with the Manchester United star having netted 81 in all competitions since January 2020.

The 2019/20 season saw Ronaldo break a whole host of records, including becoming the second-fastest player in history to reach 50 Serie A goals, after Gunnar Nordahl, and the oldest player since Arsenal’s Ronnie Rooke in 1948 to score 30 league goals in a top-five European league.

The five-time Ballon d’Or winner finished as Serie A’s leading scorer during his final season with Juventus in 2020/21, becoming the first player in history to have won Golden Boot accolades in England, Spain and Italy.

Erik ten Hag on Man Utd plans for Cristiano Ronaldo: “I want to keep Cristiano at Man United, of course. He has been very important for this club”, tells @MikeVerweij. 🔴🇵🇹 #MUFC

“Ronaldo is a giant, because of everything he has shown so far and because of how ambitious he is”. pic.twitter.com/RH2Se08WOL

Having returned to the Premier League to sign for Manchester United last summer, Ronaldo has continued to score despite a disappointing season for his club side, leading the Red Devils’ goal charts with 24 in all competitions.

His 18 league goals in 2021/22 are bettered by only Mohamed Salah and Son Heung-Min across the division.

Karim Benzema is the favourite to be crowned as winner of the Ballon d’Or in 2022, having taken his game to new levels in recent seasons.

Benzema has shone since becoming the main man at Real Madrid, scoring 85 goals in all competitions since January 2020, including enjoying a career-best 2021/22 campaign.

The 34-year-old has scored 44 goals in 44 games during the current season, including 15 in just 11 appearances in the Champions League as Real have reached the final under Carlo Ancelotti.

The France international will be crucial to Los Blancos’ hopes of winning a record-extending 14th Champions League crown as the Spaniards take on Liverpool in Paris on May 28.

Haaland ranks as the third-most prolific player across Europe’s top five league since signing for Borussia Dortmund, scoring 86 goals in all competitions.

Haaland’s career with the club began in stunning style as he came off the bench to score a debut hat-trick inside just 23 minutes against FC Augsburg.

From there the Norwegian has failed to stop scoring, setting a whole host of records including becoming the youngest ever player to finish a season as the Champions League’s leading scorer and the fastest footballer to reach 20 goals in the competition.

It has been nothing but an honour to wear this shirt. At @BVB, I've spent memorable moments, met special people, not to mention a fanbase that has been always our extra man on the pitch. The Yellow Wall is truly incredible. I'll never forget any of this! Thank you all! 🖤💛 pic.twitter.com/MegplT4y7B

Named as the Bundesliga’s Player of the Season in 2020/21, injuries have disrupted his season during the current campaign but he has still managed 29 goals in 30 appearances.

The prospect of Haaland receiving service from a City side that creates chances at will is a worrying one for rivals both in England and across Europe.

Kylian Mbappe sits narrowly ahead of Haaland for goals scored since the latter’s Dortmund debut, having scored 87 in all competitions as the leading light of Paris Saint-Germain’s star-studded attack.

Mbappe has scored 30+ goals in each of the last four seasons for PSG, with the 23-year-old one goal ahead of Wissam Ben Yedder in the race for the Ligue 1 Golden Boot ahead of the division’s final fixtures this weekend.

The France international could become just the third player – after Carlos Bianchi and Jean-Pierre Papin – to finish as Ligue 1’s leading scorer in four consecutive campaigns.

Mbappe is expected to announce a decision to sign for Real Madrid on a free transfer this summer, a deal that will unite the forward with France teammate Benzema in one of Europe’s most formidable attacking line-ups at the Bernabeu.

Robert Lewandowski, by some distance, is the highest scoring player across Europe’s major leagues since January 2020.

Lewandowski has scored a barely believable 123 goals in all competitions across the last two-and-a-half season, including breaking the Bundesliga’s single season goal record with a 41-goal campaign in 2020/21.

The Poland international has now scored 40+ goals in seven straight seasons for Bayern Munich, including a second 50-goal season of his career during the current campaign.

Another monstrous season for Lewandowski 🤖

Lewandowski equalled Gerd Muller’s record for seven awards as the Bundesliga’s leading scorer this season and has finished top of the goalscoring charts in Germany for five consecutive campaigns.

He looks set to win a second successive European Golden Shoe this season, joining the likes of Muller, Eusebio, Thierry Henry and Luis Suarez in winning the accolade on two occasions.