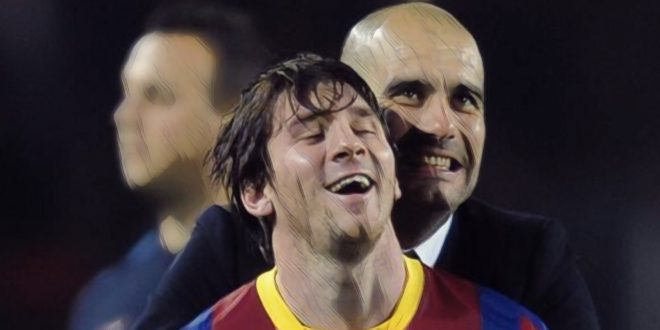 Sergio Aguero scored yet another landmark goal during Manchester City’s win over Sheffield United a couple of weeks ago, the Argentine’s goal the 1000th top division goal of Pep Guardiola’s illustrious managerial career.

The City boss has coached some of world football’s finest talents during spells at Barcelona, Bayern Munich and at the Etihad, and we’ve decided to revisit the most prolific goal scorers of Guardiola’s career thus far.

The German would enjoy arguably the best period of his trophy-laden career under Guardiola, scoring 46 Bundesliga goals over three seasons and winning a host of major honours together at the Allianz Arena.

Neither a wide player, midfielder or recognised forward, Muller’s unique style and role has become known as the Raumdeuter, or ‘interpreter of space’ for his ability to drift and ghost into goalscoring positions.

A consistent scorer and creator of goals, Muller’s finest season under the Spaniard’s reign came in his final campaign in charge of the Bavarian club, scoring 20 goals in Germany’s top flight for the sole time in his career so far and forming a formidable understanding alongside Robert Lewandowski in attack.

Sitting just one goal ahead of his Bayern teammate is Robert Lewandowski, the prolific Poland international was signed from divisional rivals Borussia Dortmund and has continued to enhance his reputation as one of world football’s best attacking talents during his time in Munich.

In just two seasons under Guardiola’s management Lewandowski would score 47 league goals, finishing as the Bundesliga’s top scorer in his second campaign as back-to-back titles were secured. That second season also saw a domestic double completed, with DFB-Pokal victory over Lewandowski’s former side Dortmund.

Perhaps his most memorable moment under Guardiola came in a clash with Wolfsburg, coming on as a half-time substitute with Bayern trailing to score five goals in just eight minutes and 59 seconds, giving Bayern a 5-1 lead and setting a number of Bundesliga records including fastest hat-trick and most goals by a substitute.

Few players have seen their game elevated in quite the same way by Guardiola’s methods as Raheem Sterling.

The England international has long been recognised as a promising talent but has flourished since the Man City manager’s arrival at the Etihad, developing his all-round game and scoring prolifically for both club and country.

Sterling’s lightning pace and ability to ghost past players has always been a strength, though he is now combining those attributes with evasive, intelligent movement and a coolness in front of goal that has seen him improve his goal tally in each of Guardiola’s seasons in charge.

Such has been the 25-year-old’s improvement that he has scored 53 Premier League goals since Guardiola took over at the Etihad, the winger being named as the FWA Footballer of the Year last season and now regarded as a talismanic figure in the blue half of Manchester.

The man to score the 1000th top-flight goal under Guardiola’s management is the second highest goal scorer under his stewardship, Aguero having overcome a difficult start under the City boss to reemerge as a key figure for the club.

Having demanded more from the Argentine following his arrival at the Etihad, Guardiola has seen Aguero tailor his game to suit the team’s needs whilst continuing to fire at a prolific rate.

The 31-year-old has hit 72 league goals during the Spaniard’s reign, hitting 20+ Premier League goals in each campaign as City have emerged as the dominant side in English football.

Aguero’s record in front of goal has seen him become the record goal scorer in the club’s history, whilst he is now just one goal short of equalling Arsenal legend Thierry Henry as the most prolific foreign player in Premier League history.

No surprise which player leads the way in this feature, Messi and Guardiola would be the two key figures behind arguably the greatest side in club football history, Barcelona’s famed tiki-taka style transforming football and conquering both at home and abroad.

In Guardiola’s four seasons in charge at the Nou Camp, Messi would help Barcelona to three consecutive La Liga titles and two Champions League triumphs, scoring 138 league goals during that time and being awarded the Ballon d’Or in each season of the Spaniard’s reign at the Nou Camp.

There are few superlatives yet to be lavished upon a player who many regard as the greatest footballer of all-time, the Argentine genius synonymous with Guardiola’s most memorable moments in Catalonia and the most prolific goal scorer the former Barcelona manager has ever coached.