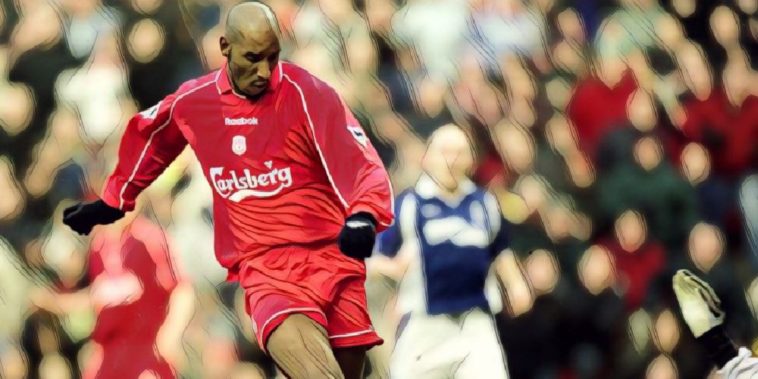 Emile Heskey believes Liverpool made a mistake in failing to sign Nicolas Anelka on a permanent basis following the forward’s loan spell at the club in 2002.

Heskey formed part of an emerging Liverpool side under the guidance of Gerard Houllier who won a treble of cup successes, lifting the FA Cup, League Cup and UEFA Cup during a memorable season in 2000/01.

The following season saw the Reds finish as runners-up and hopes were high that the club could end their long wait for a league title, only for a poor summer of recruitment to set the club back and they remain without a title in almost three decades.

Heskey formed a strong understanding with Michael Owen during four years on Merseyside, and has now reflected on his former strike partnerships throughout his time at Anfield.

“Milan Baros came in and did really well as a young talent, Nicolas Anelka too, and we were all pushing each other and striving to become better.”

Heskey spoke further on the abilities of Anelka in particular, the former France international scoring five times for the club during a brief loan spell at the club from Paris Saint-Germain.

Liverpool surprisingly opted against signing Anelka on a permanent basis and instead brought El-Hadji Diouf to the club in a £10m deal, a decision which Heskey believes was a huge mistake, the French striker going on to play for Man City, before spells with the likes of Bolton and Chelsea – to name just a few.

Speaking on Anelka, Heskey added: “We did well together and we had a good understanding. Everything clicked quite well and he is a phenomenal player. Even then he had a lot to offer. I’m surprised that we didn’t keep him but it is just one of those things.

“He was underrated and a lot of people will look at him and say they know how good he was, but a lot don’t realise how good he actually was. His ability, how sharp he was, how clinical he was when it comes to finishing, how quick he was – he had everything. He was more refined when he came to Liverpool and he was more of a senior player.

“We were getting a great player and without a doubt, it was one that was missed, not signing him, but you move on and you try and push forward.”

Rangnick explains why Werner would ‘fit a club like Liverpool’