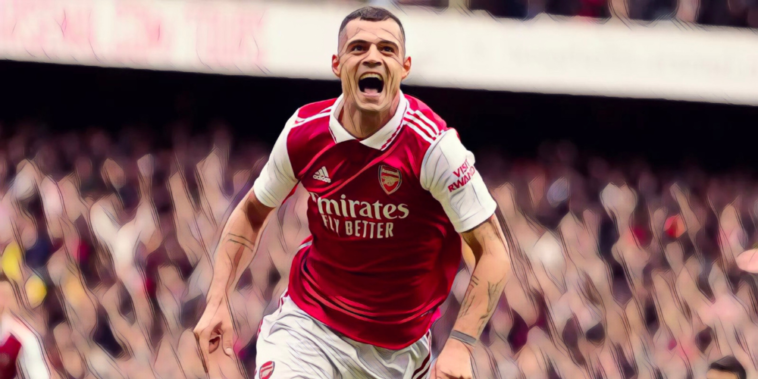 Tributes to hat-trick heroes Erling Haaland and Phil Foden, alongside the effervescent Bernardo Silva, can be found in our Premier League Team of the Week, with space in this column reserved for the wonderful talent that is Kevin De Bruyne.

Manchester City’s derby destruction of Manchester United had no shortage of star performers and in amongst it, as ever, was De Bruyne who was at the heart of City’s convincing win.

He has now assisted in each of his last five Man City games. 🅰️🅰️ pic.twitter.com/wC83RuxQJ4

United had no answer to his movement, while his quality in the final third is unmatched anywhere in Europe. De Bruyne added two more assists to his growing collection, moving to eight for the campaign and already equalling his haul from the entirety last season.

His second assist into Erling Haaland was out of this world, a delivery of perfect precision and the sort of regular goal-creation from De Bruyne that is a joy to watch.

‘The height of stupidity’ was Roy Keane’s withering assessment of Luis Sinisterra’s red card this weekend, as the Leeds winger was sent off at Elland Road.

The Colombia international gave his team a huge task during a bad-tempered goalless draw with Aston Villa, after picking up two needless – albeit a little soft – bookings.

Having been cautioned for bundling over John McGinn in the first half, Sinisterra was given his marching orders after inexplicably blocking a quickly-taken free-kick just minutes into the second period.

Granit Xhaka’s renaissance at Arsenal continues to go from strength to strength with a brilliant performance in the North London derby epitomising his importance to the early league leaders.

The Switzerland international was partly at fault for Spurs’ first-half penalty, but it was a slight blemish on an otherwise exemplary performance. Xhaka is thriving in a roving role in Arsenal’s confident team, where his box-to-box influence is helping to decide games.

📩 Sealed up by Granit.

🤩 How did you react to this one, Gooners? pic.twitter.com/aRzxGqla5i

His quality in possession down the inside left channel has been evident and he put the seal on a huge win for the Gunners with the third, ghosting into the area to slam home and secure all three points.

Xhaka may no longer wear the armband at the Emirates, but he is, without doubt, a leader in this team.

Liverpool’s poor form this season has been due to a number of names performing well below their usual best. Trent Alexander-Arnold has faced much scrutiny this season and did little to dim the spotlight on him following a poor defensive display in the 3-3 draw with Brighton.

Virgil van Dijk is another who is well short of his usual high standard this season and an indifferent campaign to date continued against the Seagulls. The Netherlands international was caught ball watching for Brighton’s second goal, as Leandro Trossard ran off him to find space and fire home the Seagulls’ second.

Van Dijk was then guilty of a miscue for Trossard’s hat-trick strike, as he fluffed a simple clearance. The centre-back missed Kaoru Mitoma’s cross and Trossard swept in to punish the mistake and rescue a point for Brighton. Perhaps, for the first time in his Liverpool career – with Ibrahima Konate closing in on a return to fitness – Van Dijk’s place in the side is under question.

Newcastle ended their six-game wait for a Premier League win in emphatic fashion, as the Magpies took advantage of an early red card to thrash Fulham

Miguel Almiron scored twice for the visitors, though it was the performance of Bruno Guimaraes which caught the eye at Craven Cottage. The Brazil international has become an instant fans’ favourite since joining Newcastle in January and was a class above in west London this weekend.

Very happy to be back and to find the winning ways again! Let’s go @NUFC 🖤🤍! Amazing support as always pic.twitter.com/DBV9yVEzc1

He created four chances, won three tackles, won 100% of his duels and showcased an expansive passing range with excellent distribution over both long and short distance. Guimaraes’ performance was rewarded with an assist, as his neat one-two with Almiron led to a stunning strike from the Paraguayan.

The 24-year-old already appears as one of the most well-rounded midfielders in the Premier League.

A weak-link in a Spurs side outplayed at Arsenal.

Emerson Royal has failed to convince for much of his time in north London and had a difficult afternoon up against Gabriel Martinelli. He was fortunate to escape after being caught under one cross into the area as Gabriel Jesus headed wide, but less fortunate after being dismissed with the game hanging in the balance.

His challenge on international teammate Martinelli was high and needless with the forward inside the Arsenal half, a decision which left Spurs – then trailing 2-1 – with a tough task to turn the game around.

Emerson Royal sees a straight red for this challenge on Martinelli! 😲 pic.twitter.com/rXz1AVLgDx

Just three opposing players have ever scored a Premier League hat-trick at Liverpool, with Trossard joining an exclusive group to get the Roberto De Zerbi era up and running at Brighton.

Trossard was a menace to the Liverpool defence all afternoon. Sharp and clinical around the edge of the area, he slipped past Trent Alexander-Arnold with ease to lash home a first, before doubling the visitor’s advantage with a fierce strike with flashed past the outstretched hand of Alisson.

Liverpool staged a fightback to turn the game around, but Trossard had the final say with an equaliser as he swept home Kaoru Mitoma’s cross for a late leveller.

Trossard’s treble was Brighton’s first ever in the Premier League and the Seagulls’ first top-flight hat-trick in 42 years. He now has five goals in just seven league games this season, as many as he managed in both the 2019/20 and 2020/21 campaigns.

Nathaniel Chalobah’s first start of the Premier League season lasted just eight minutes as the Fulham midfielder was sent off against Newcastle to leave his team in trouble.

Chalobah’s rare chance to stake a claim for a regular role ended early, as a forceful challenge on Sean Longstaff saw the 27-year-old dismissed. An initial yellow card was upgraded to red on review, with Darren England sent to assess the pitchside monitor by VAR.

Perhaps over-eager to impress, he caught Longstaff on the ankle studs up and was sent off as a result. In his absence, Fulham were overrun to crash to a 4-1 defeat at Craven Cottage.