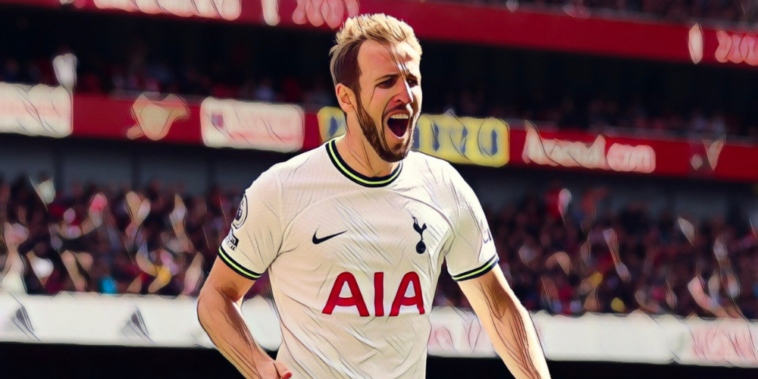 Harry Kane scored a milestone goal this weekend as the Tottenham forward netted his 100th away goal in the Premier League.

It is a goal Kane is unlikely to cherish as Spurs crashed to defeat in the North London derby, but is another landmark moment for a footballer who continues to climb the Premier League’s all-time goal chart.

Following the 29-year-old’s century on the road, we look at the five players with the most away goals in Premier League history.

Cole’s overall haul of 187 goals trails only Alan Shearer, Wayne Rooney and Harry Kane, with 83 of the forward’s efforts having come in away fixtures.

Cole won the Premier League’s Golden Boot during his first-ever season in the division with Newcastle in 1993/94, in which he scored a record-breaking 34 goals to be named as the PFA Young Player of the Year.

He later moved to Manchester United in a British transfer-record deal and enjoyed huge success at Old Trafford, where he won five league titles and the Champions League before spells with clubs including Blackburn, Fulham and Manchester City.

The greatest goalscoring midfielder of his generation, Frank Lampard remarkably ranks alongside the Premier League’s most prolific forwards following a goal-laden career in England’s top division.

Having emerged from West Ham’s academy ranks, the midfielder signed for Chelsea in 2001 and became an integral figure in the west Londoner’s emergence as a superpower following Roman Abramovich’s billionaire takeover two years later.

Lampard is the sixth-highest scorer in Premier League history on 177 goals, with almost half (48%) coming in away games.

The former England international reached double figures for league goals in ten consecutive campaigns for Chelsea between 2004 and 2013. His most prolific season came in 2009/10 as he netted 22 league goals for Carlo Ancelotti’s domestic double winners.

Alan Shearer is the Premier League’s all-time record goalscorer after netting 260 times in the division for Blackburn and Newcastle, a landmark that has so far proven impossible to match.

Shearer signed for big-spending Blackburn ahead of the Premier League’s inaugural season and helped the Lancashire side to the league title during a prolific four-season spell at Ewood Park.

The forward scored a staggering 112 league goals in just 138 appearances for Rovers, becoming the first – and so far only – player to score 30+ league goals in more than one campaign, as he achieved the feat in three consecutive seasons.

Shearer signed for Newcastle in a world-record £15m deal in 1996 and became the all-time record scorer for his boyhood side, though silverware success proved elusive despite his exploits at St James’ Park.

Despite ranking third, Shearer has the lowest percentage of away goals from players on this list with only 33.46% of his record Premier League haul coming away from home comforts.

Wayne Rooney netted 94 goals on the road during an unforgettable Premier League career.

Rooney is one of just two players, alongside Alan Shearer, to have scored 200+ goals in the Premier League with with 94 of the former Everton and Manchester United forward’s 208 goals coming at away grounds.

Having burst onto the scene as a teenager at Everton, Rooney signed for Manchester United and won every available honour during a glittering career at Old Trafford, in addition to overhauling Sir Bobby Charlton as the Red Devils’ record scorer.

After 253 goals for the club he re-joined Everton for a single season spell, before ending his career with short ventures in MLS at DC United and with Derby County.

Kane’s goal at Arsenal extended his record as the Premier League’s leading scorer away from home, having slammed home an emphatic penalty to briefly level the scores at the Emirates.

Kane has been a goalscoring phenomenon since his emergence from Tottenham’s academy ranks and has averaged 0.66 goals per game to rise to third among the Premier League’s all-time record goalscorers.

100 – Harry Kane's 100 away goals in the Premier League have come after only 147 appearances. Unfazed. pic.twitter.com/Pter9ctFzW

That remarkable rate even improves marginally in away games, with Kane having scored 100/190 of his Premier League goals at away venues (0.68 per game).

Kane has won the Premier League’s Golden Boot on three occasions and is one of just four players – alongside Thierry Henry (4), Alan Shearer (3) and Mohamed Salah (3) – to have won the award three or more times.

He is now just ten goals from becoming the third Premier League player to reach 200 in the division.